How to Get Rid of A Hickey 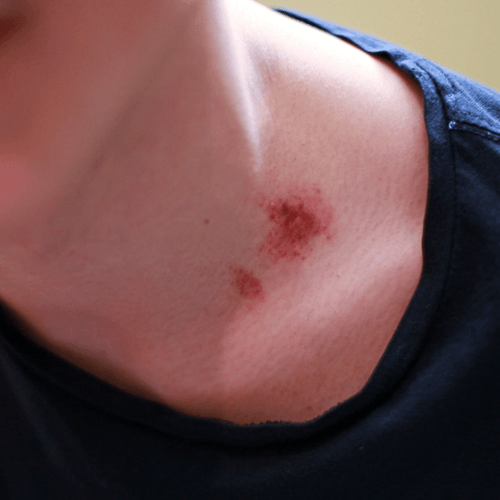 Ah, a good old fashioned make-out – what seems to be a great idea at the time can prove to be embarrassing if you’ve got a family dinner or work meeting to show up to soon after.

If you’ve got a hickey, you’ve actually got a kind of bruise – sucking on the skin too hard makes blood capillaries under your skin burst, and gives the hickey its discoloured tone compared to the rest of your skin.

Whether you have work in the morning, a family dinner to attend, or something to hide from a significant other (shame on you!), there are a number of ways to get rid of those pesky hickeys.

From hiding them, to covering them up, to actually eliminating them, there are a handful of tips below that should help you get rid of that red mark on your neck you worked so hard for.

1. Cool down the bruised spot.

Before you do anything, you should cool down the bruised spot with either an ice pack or a cold spoon. If you use a spoon, make sure you freeze it for about an hour beforehand so it’s nice and frosty.

Cooling down the area will slow down and manage the blood flow in the bruised area, so immediately when you notice a hickey, you should apply a cold source to it.

2. Apply a heat source to the bruise.

This only works roughly 48 hours after you’ve got a hickey. After two days or so, the capillaries that were burst from the suction will have healed, so applying heat
will help the leftover blood from the clot be absorbed back into the bloodstream.

The heat works by speeding up the blood flow around the damaged area, and gets the nutrients it needs to repair at a faster rate.

3. Scrub with a toothbrush.

After you’ve let a cold source sit on your hickey for a few minutes, take a toothbrush (a new one, if possible) and gentle rub the area with the bristles of the brush. Doing this will help the blood from the capillaries flow outside of the affected zone, preventing the discolouration of the blood under your skin and spreading the blood around more evenly to the surrounding skin.

Aspirin has blood-thinning (anti-coagulant) properties, so if you take an aspirin within 24 hours of getting a hickey, it should make the blood under your skin easier to manage. Once you’ve done this, then you can apply the other steps easier and more effectively.

Vitamin E supplements are also known to manage blood flow, so this is another possible option. Vitamin E works by widening blood vessels which makes it easier for the fuel to flow through the veins. It also stops clots from forming by making more room for the liquid to get around.

A flat surfaced object, like a coin, can be used to break down the clotted blood under the skin where the hickey is. Taking two fingers, stretch out the skin of the affected area and take the coin’s side to the bruise. The idea here is to buff out the blood out of that particular spot so that it may go elsewhere. Be careful, though – too much pressure applied with the edge of a coin can make your hickey into a cut or a worse bruise.

You can also do the same with a pen lid or another cylindrical object – being careful, of course, not to worsen the wound.

Rubbing alcohol has cooling properties, so it helps to apply a little bit to the hickey so that, again, the blood around the bruise can flow better to the surrounding skin. Be sure that you use moisturizing lotion afterwards, as rubbing alcohol can sometimes dry out the skin.

7. Wear a sweater, necktie, or scarf.

If all else fails, you could always cover up the bruise with an article of clothing. In the winter, a turtleneck sweater or a scarf should do, and in the summer, a light scarf, necktie, or bandana should do just fine. If your hair is long, you could even drape it over the affected area to avoid people seeing it, if only for a short time.

Of course, you should make sure that your choice of clothes is appropriate for the season. It would be pretty obvious you have a hickey if you were wearing a wool scarf or turtleneck in the middle of July.

If you have a shade of blush the same tone as your skin, you could easily apply some of it to the hickey and nobody would be the wiser (unless they were paying really close attention.

Be careful that you won’t be near a water source for too long, though, as the makeup will wear off and you’ll be right where you started. Also, be sure to buy a blush that is as close to your skin shade as possible.

Everybody needs to tell a little white lie once in a while, right? What better time than with a stubborn, embarrassing hickey. You could pull it off as a sports injury, a curling iron burn (one of the more common ones), or whatever you can come up with that sounds believable. Just remember – people are often not as gullible as you think they may be.

Sometimes you get a hickey that’s so bad that nothing works. They really got in there deep, didn’t they? Well, in that case, if nothing else works, you’ll just need to wait it out and put up with the glances at it. Hey, at least you’ll have a story out of it (for better or worse)!

Intimacy is all part of being human, but sometimes it is inappropriate to be flaunting a hickey around. When you’ve got to get rid of a hickey for a social gathering, work, or just to avoid talking about it, try any one of these tips and you’ll be on your way to chatting without the awkwardness again in no time.