How to Get Rid of a Sebaceous Cyst 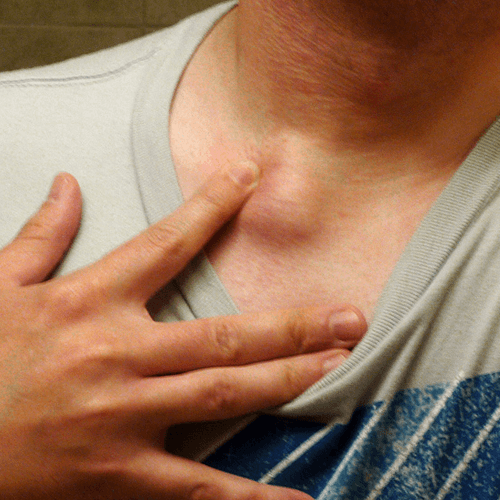 A lump in your genital area doesn’t necessarily mean you’re infected with a sexually transmitted disease (STD), or you have a cancerous tumor. The lump may just be a sebaceous cyst or epidermoid cyst, which is oftentimes harmless. Doctors generally don’t recommend treating sebaceous cysts, but you may still get rid of them if they get infected or grow too big.

What is a Sebaceous Cyst?

The epidermis, the top layer of your skin, is made up of a thin protective layer of cells that you continuously shed. Most sebaceous cysts form when these surface cells, instead of shedding normally, move deeper into your skin and multiply. This often happens in areas where there are small hair follicles and large sebaceous glands, such as your genitals, upper back, neck, and face.

The multiplying cells form the walls of the sebaceous cyst, and secrete keratin into the interior. Keratin makes up the thick “cheesy” substance that sometimes drains from the cyst. Several factors contribute to the abnormal proliferation of cells, including:

Sebaceous cysts may look like acne or trichilemmal cysts, which have different characteristics. The following is a list of common symptoms of sebaceous cysts to help you determine your condition:

Consult your doctor to confirm your skin condition. In most cases, doctors can diagnose sebaceous cysts based on their appearance alone. If your doctor suspects another skin condition though, he may refer you to a dermatologist for examination and treatment.

After diagnosis, your doctor will most likely recommend leaving the cyst alone if it’s not painful. You may choose to remove the cyst however, if it’s infected or if it’s unpleasant to look at. The following is a list of medical treatments for sebaceous cysts:

Treating your sebaceous cyst at home is not as effective as surgery, but it’s less expensive and easier. Here are some tips to reduce the size or completely remove your cyst at home:

15 People reacted on this