How to Get Rid of Anger 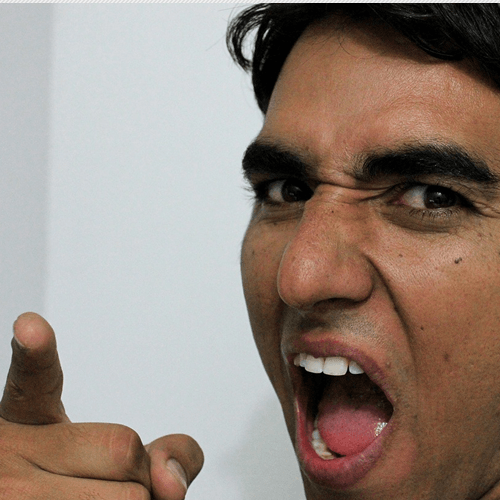 Anger is an emotion comparable to a strong wind: constantly changing and sometimes easily provoked. It isn’t permanent, but it can be a serious challenge for many people. You aren’t alone! Many people carry a lot of anger around with them on a daily basis. Getting rid of anger is easier said than done, and is easier for some people than others. It might take a combination of suggestions to deal with it properly, but don’t fret, and don’t get angry, of course! Read on to find suggestions that can help you manage your anger.

Anger to a person is the same as wind to a tree. It isn’t part of our permanent physical make-up, it is an emotion that passes through. The good news here is that in many cases, all we have to do to get rid of anger is wait it out.

Of course, chances are that you probably don’t feel like waiting. But don’t confuse waiting with doing nothing. We’re not just going to sit here and take it! We’re going to get even, all right – we’re going to fix their wagon! But first we’re going to wait.
Ok. We were mad. We were really mad. But we waited until we weren’t completely consumed by anger. The older, simpler part of our brain isn’t flooding us with chemicals that make us want to act like an action movie star, or a first person shooter in a video game. The newer, bigger, shinier part of our brain is back in the driver’s seat.

Waiting your anger out is a key step in the process. Once you have yourself settled down, you have a couple of tools in the kit which are really handy for getting rid of anger permanently.

If we want to stop letting anger control us, then it is a good idea at this point to take a quick look at what the your anger is actually composed of. Anger is biochemical. It is created when very simple and older parts of our brains release chemicals like adrenaline, to help our bodies respond to the “fight or flight” response.
Luckily, when our brains release these chemicals, they will drain out in time, and that’s why waiting is effective. We are just waiting until the chemicals flush out of our system.

If we are angry at someone, and act on those temporary feelings, we’ll end up hitting them or saying something we know will hurt their feelings, and then we won’t be getting rid of anger, we will be creating “future anger,” like pouring gasoline on a fire to put it out (which doesn’t work, of course).

The second most important thing we can learn about anger, if we want to get rid of it, is that anger serves a purpose. The purpose of anger is to protect us. We wouldn’t have survived a million years of evolution if every time a sabre tooth tiger tried to eat us, we tried petting it instead.

Anger is good. It is a memo from our soul that we are in danger. It is a signpost on the road to safety, and we don’t want to ignore the instructions. Ignoring the instructions, as anyone knows who has assembled anything requiring instructions, can lead to more anger than can fit in a small apartment!

If we don’t deal with the problem that is causing the anger in the first place, then it will continue to bother you constantly, which is not the solution.

4. Don’t let others provoke you.

So, why were we angry? Lets say, that we have a sweetie. And let’s say, that this wonderful, charming, and good looking significant other of yours is giving you a hard time for being a slob and not doing housework. They might have come out with that classic phrase “you never do any housework”. Or maybe they asked the philosophical question “why can men not see dirt until it is large enough to support agriculture”?

At this point, they are angry, and now we are angry. We are now two gerbils, each in our own cage, staring across a huge gulf of space, running on our wheels to nowhere, and occasionally chewing the steel cage bars in frustration. Instead of letting yourself get angry, try to defend yourself first. Explain that you are working on getting the work done, but you just haven’t had the chance to get to it just yet.

To really get rid of anger permanently, in this case, the two people in our example will have to climb off their “gerbil wheels of recrimination,” perhaps start with some fluffy, furry cuddling, and engage their higher brains to make some progress with the problem at hand in this case, “housework: what is to be done, and who is to be doing it.”

If you have angry people around you in your life, it will be very difficult for you to get rid of your own anger. If you are easily provoked, this becomes all the more challenging. You just might need to consider avoiding these people in your life if they continue to bring you town.

If you can’t avoid this person, you will need to practice active listening so that each party feels heard and respected. It will certainly take compromise, as each party meets the other half way. It will also likely take love, which will be lurking underneath the whole discussion, and be demonstrated by subtle body posture.

Your anger problem might require therapy. Your anger might need professional help, and this is perfectly acceptable to admit. Everyone experiences anger at some point in their life. You shouldn’t have to experience anger alone!

While professional help might be just the ticket, consider taking some time off as well as an alternative form of therapy. If you haven’t given yourself enough personal time off, a break might be just what you need to get yourself back on track. Enjoy a drink, get a massage, or try spending some quality time with some of your good friends or your significant other.

At the end of the day, the hope is that your anger will be a thing of the past. Try talking out the situations that make you angry, and try avoiding these situations as much as you possibly can in the future, or avoiding people that make you angry. And if you can’t handle your anger alone, you shouldn’t! Consider using therapy as a perfectly acceptable strategy to get rid of anger in your life. Good luck to you as you deal with the anger in your life in whichever way you feel is best!