How to Get Rid of Ants in the Garden

Posted on: August 19, 2013 Posted by: Nicole Harding Comments: 0
Tags: How to Get Rid of Ants in the Garden 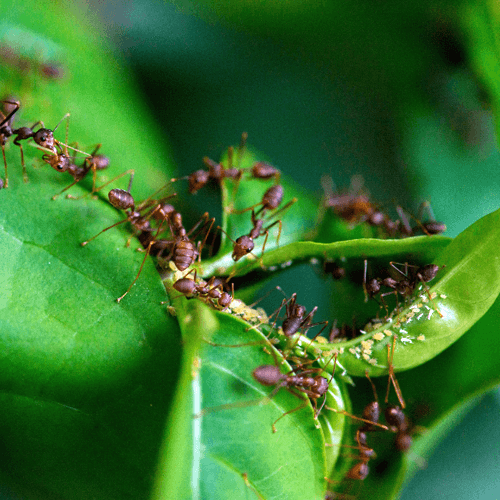 Ants are totally amazing creatures, and if you missed out on a University biology degree, getting rid of ants from your garden is a good time to learn about these little creatures. Did you know that some ants practice forestry? Lemon ants kill off the plant competitors of Duroia hirsuta, so they can concentrate them in patches to build their nests inside the trunks. There you have it, ants made the first subdivision! But maybe they are overrunning your subdivision. If ants are spoiling your picnic, here’s how to quickly restore some balance in your garden.

If you want to get rid of ants from your garden faster, you must start by spying on them a bit. This is fun, actually. Where is their nest? Where do they like to go? If you watch closely, you’ll notice the ants follow little “ant trails,” just like the Gold Rush pioneers followed the Oregon Trail to the west coast.

Ants communicate with each other with sounds, touch and pheromones. The first ant leaves a scent trail, saying “Food This Way,” and the other ants follow along. Once you spot their trails, you can use a spray bottle of vinegar or a spice shaker of cinnamon or some diatomaceous earth (DE) to erase their scent, and out-fox them. Tricky you!

DE is very handy around the home, especially for getting rid of ants. DE is crushed rock made from the tiny exoskeletons of tiny fossilized “diatoms” (a kind of algae), forming microscopic tubes of silica. They are almost as hard and sharp as diamonds.

Food grade DE taken internally will help cleanse parasites from you and your pets. Garden grade DE will kill most insects on contact, either by scrubbing off their waxy external coating until they dehydrate from moisture loss, or if the DE gets inside, by slicing their tummies up.

Important note: Filter grade DE is different, and should not be used in gardens and never internally. DE is not a chemical, so ants cannot become resistant to it.

While it is hard to sit down with an ant and have a reasonable conversation, ants are actually pretty smart. Not as smart as dogs, but smarter than most soccer hooligans. They are one of the few non-mammals observed to use interactive teaching. You can teach them with negative reinforcement.

Ants hate chalk, too, because it is a fine calcium based powder like DE. Ants will rarely cross a chalk line. You can teach them where you want them to go by drawing some chalk “instructions” on the ground. Your neighbours might think you are sending messages to Google Earth or aliens, but hey, life is short, and we all need a little fun.

4. Convince them to get lost.

Are ants still not getting their lessons? Is a rainy month playing havoc with your instructions? Why not declare your whole garden off limits? Get a quart of DE, and give your garden a good dusting. You’ll be getting rid of a bunch of other creepy crawlies too.

A number of garden plants will also deter ants. Garlic is one of the best, and is helpful with other predators, in the evening, around twilight. Geraniums, asters, and calendula are also effective. Chrysanthemums, a genus of the Asteraceae family, are very effective. That’s what they grind up to make common natural garden pesticide Pyrethrum.

Sometimes, our primitive instincts overcome us, the ants in our garden get us down, and we have to kill them. Don’t worry, you aren’t alone. Humans often kill things, to make everything from hamburgers to authentic leopard skin pillbox hats. If the time has come to send a few of these little Formicidae to meet their maker, you can’t count the ways.

A direct hit from your DE tube will kill them, as will a dose of baby powder (that chalk step, remember?) The most convenient way to kill an ant naturally is with a spray bottle full of water including a teaspoon of soap and a quarter cup of vinegar. It takes a minute or two, but it kills even the toughest ant, and leaves a scent deterrent too.

Of course, you could get in your car and fire up its internal combustion engine and consume some rapidly depleting fossil fuels and drive to a hardware store and elbow aside some harmless old folks to race to the aisle with the spray bombs of Ant Killer. It will kill the ants too, but vinegar is way cheaper and simpler, works just as well, and evaporates harmlessly.

Ants are considered food in different parts of the world, and you could get rid of your problem and increase your protein uptake simultaneously. The eggs of two species of ants are used in Mexican escamoles. They are considered a form of insect caviar and can sell for US $40 per pound.

Maybe their garden was being overrun too!

If you really, really want to get rid of ants from your garden permanently, then you must get rid of their nest. As said before, ants are just trying to do their jobs. They have been around about the same length of time as trees, about 150 times as long as we have. Ants are important to our ecological world in many ways!

That said, losing a nest or two won’t be driving ants to extinction any time soon.

In the old days, people used some pretty serious chemicals like Chlordane and Lindane as garden pesticides. These, and others, are persistent and toxic and might take out your pets or children with the ants. Using general pesticides is like dropping a nuclear bomb in your garden to kill a few ants. All you really need is a set of outdoor ant bait traps.

Ant bait traps will definitely clear out the nest in about 3 weeks, without hurting anything else. They work by mixing an ant-specific chemical with sugar. The ants eat the sugar, run back to the nest, and die. The ants in the nest need to keep everything tidy, so they eat the dead ants, and then they die, and so on. It sets off a chain reaction, until the ants either leave the nest for somewhere better, or die.

It’s hard to trust companies that tell you that their chemicals “only hurt the ants”. If you are like most people, then you can make your own ant nuclear warfare, with some icing sugar and borax, DE, and cornmeal. It works just as well. The little store bought ant traps are pretty handy though, and will keep pets and kids away from the sugar.

That wasn’t so bad, was it? And it was likely fun too. Getting rid of ants from your garden is a good excuse for a little biology refresher. Ants are fascinating, so it is very interesting to observe them, find their nest, watch them use their little ant trails, and then try and keep them from taking over the whole place with the careful application of simple, safe household stuff like chalk, cinnamon, vinegar, or plants.

While you are at it, why not plant most people’s favourite ant deterrent, mint! If you plant Mojito mint, you can celebrate your new ant-free garden by inviting the neighbours over and sipping some mint tea, a few authentic Mojitos, or a mint julep or two.