How To Get Rid of Ants in the Kitchen

Posted on: November 20, 2008 Posted by: Nicole Harding Comments: 2
Tags: How To Get Rid of Ants in the Kitchen 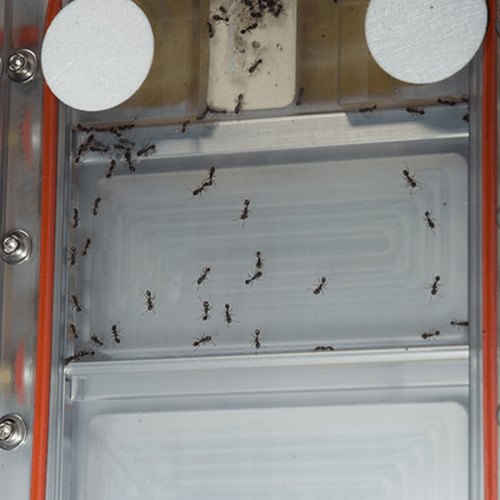 If you’ve ever read the 1938 short story “Leiningen Versus The Ants” by Carl Stephenson, you will remember who won that battle. Hint: it wasn’t Leiningen. The story was an essay in how humans can be awfully stubborn, and come to grief by fighting against nature, instead of working with it.

When countries go to war, they don’t lift a finger without engaging that old oxymoron, “military intelligence”. In your war on ants, you will be “head spy”. In fact, you are a 007 agent, because you have a licence to kill.

In the words of Bond villain Goldfinger: “No Mr. Ant, I want you to die”.

The two key pieces of information you need to stop the ants from taking over your world are: where is the nest, and where are their “ant trails”. Ant trails are set routes they use in and around your kitchen, which they follow religiously. You can use this information against them!
Just killing the ants won’t get the job done. Each ant is a trained kamikaze soldier, willing to sacrifice its life for the colony, which could have thousands of members. To get rid of ants in your kitchen permanently, you have to get rid of the nest completely.

That sounds pretty extreme, but once the ants realize their nest is under threat, they will set out and look for a new, safer location. You aren’t committing genocide here, more like “forced relocation”. Some ants are gonna die though, because they can’t be reasoned with. Ants are weak on diplomacy.

If you could get at the nest, you could just dig it out and pour vinegar on the ground. Most of the time, however, the nest is hidden in your walls, or near your house where you can’t get at it. Ants are security minded creatures.

To convince them to move, you need to set a delayed action poison bait, which the ants will eat before returning to their nest. When they die in the nest, other ants will eat them, as a “tidy-up” mechanism, and then those ants will die, setting off a chain reaction no less devastating to the colony than a nuclear explosion would be to a city, minus the radioactive fallout.

The only “fallout” from your chain reaction, is that other insects that eat the dead ants will also die. Most higher life forms can tolerate ant poison in the small amounts to be found in one or two dead ants, although you obviously don’t want pets or children gulping down large amounts of ant poison.

Generally, yes, and natural poisoned bait is easy to make.
The bait is confectionary sugar, or honey, (50% of the total mass), and the ant killer is either borax or diatomaceous earth (DE). The sugar attracts the ants. The borax or DE kills the ants. Both are considered natural home products, relative to complex synthetic chemicals.

Diatomaceous earth is a very fine powder made of the broken shells of deceased crustaceans. On a microscopic level, each shell is very sharp, and the insects die when their innards get all cut up. It’s not a nice way to go, but it is a way of killing insects without lacing your home or garden with Chlordane or other very nasty chemicals.

Borax is a simple household chemical, used as a fire stopper in mattresses. Like DE it is available from your health food store or eco-shop as a cleaner and a whitener for laundry soap.

For “natural” products, DE and borax are both very effective ways to get rid of ants in your kitchen. They are much safer in the big ecological picture, but you still can’t let children and pets spread them on their breakfast cereal. The trick is putting them around your kitchen in a safe and easy to clean way.

Your local hardware store has a wall full of lethal ant baits.
The bait will also be sugar, but the ant killer component could be anything, and they are rarely labelled properly. Lack of labelling makes it hard to look up the Material Safety Data Sheet (MSDS) on the chemicals. Without the MSDS information, you have no idea what you are dealing with, and generally, the chemical industry is more concerned with the effectiveness of their product than the environmental impact.

One very popular ant killer is Abamectin, which is in Raid. Abamectin is quite toxic to dogs, especially collies with a certain hereditary trait. The question is though, are your pets (or children), likely to be able to get at this ant bait?

The huge advantage of store-bought baits is the little round tins they come in, with the small ant sized entry holes. Although they can be re-filled with liquid ant bait from the hardware store, many people use store-bought baits the first time to get the handy tins, and then re-fill later with borax and honey.

Using the information your intelligence network gathered, buy 7-10 bait tins for placing around your kitchen. Place one on each ant trail, and anywhere you think the ants might be congregating or travelling by. Under sinks, at floor level, by doorways, and in the back corners of counters are favourite spots. It will take a few weeks, but you are on your way to getting rid of ants in your kitchen.

However, most ant colonies are outside your house. If you can even identify what corner of your house, or section of wall it is you think they are getting in, then you should buy some exterior bait traps, which will have a stake under them to insert into the soil. Now you have a double line of defence, and more than twice the chance of getting your poisoned bait carried back to the colony in the stomachs of its very own ants.

5. Keeping ants out of your kitchen

While you wait a few weeks for the colony to move, there are several things you can do to speed up the process, and get rid of ants in your kitchen while you are waiting. Hopefully you found the point where they’re entering your house.

Try and block up any inlet points with weather-stripping for doors, or anti-vermin spray foam, which comes in handy cans from your hardware store. Foam is great for sealing hard-to-reach cracks.

Cinnamon, cayenne pepper, mint, bay leaves, black pepper, cloves, and garlic or only a few things that ants don’t like, and you can use them as barriers to thwart the exploratory inclinations of ants. If you live in Australia, the phrase is: “No walkabout for you, mate.”

The ants are searching your kitchen for breadcrumbs and jam to take back to their nest and feed their families. Vacuuming your kitchen every 3 days and cleaning all surfaces with soap and a bit of vinegar regularly will help stop this war before it starts.

Perhaps the best way to get rid of ants in your kitchen, is not to invite them inside in the first place. After all, it doesn’t seem very fair to the ants for us to lay all this ant food out, and then destroy their nest to stop them from trying to do their jobs.

6. How to slaughter ants (naturally)

Once the war starts, you are faced with “Live and Let Die”. While the humanitarian way of removing unwanted bugs from your house is to trap them in an old yogurt tub and chuck them out the window, this won’t work for ants, which are driven by their DNA to be especially pesky.

Unfortunately, hunting down every little individual ant won’t solve the problem. If you want to get some peace and quiet while you are making Sunday brunch, the best way to kill ants in your kitchen is to fill a quart spray bottle full of water and add a teaspoon of soap and a ¼ cup of vinegar. A quick spray, and they’re done.

The simple way to get rid of ants in your kitchen is to feed them poisoned bait and let them carry it back to their nest, which will be destroyed. The survivors will get the idea, and head out for a new promised land.

Your ant-free kitchen begins with some keen observation of where the ants are coming from, and where they like to go. It progresses with you setting out the bait tins in the right places, keeping your counters clean, and waiting a few weeks.

A little patience, and your kitchen will soon be yours again.