How to Get Rid of Backseat Drivers

Posted on: February 26, 2009 Posted by: Nicole Harding Comments: 3
Tags: How to Get Rid of Backseat Drivers 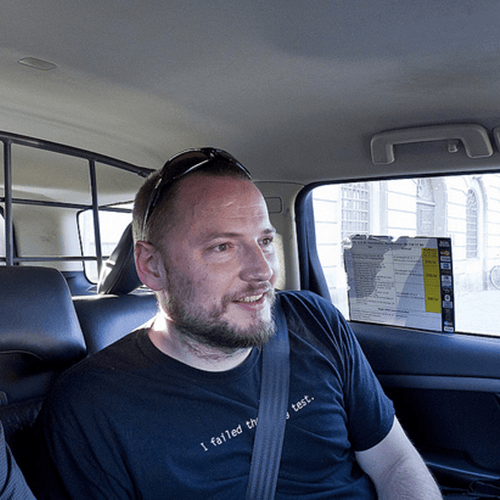 “Stop!” “Turn left!” “Watch out for that car!” Sometimes it seems like the distractions inside the car are the ones that are most likely to cause an accident. As any driver can confirm, nothing makes a stressful drive worse than an backseat driver constantly telling you what you should do.

A distracted and agitated driver will pose a safety risk to everyone in and around their vehicle. Before resorting to taping a passenger’s mouth shut and having a potentially awkward conversation with the police, here are a few ways to get rid of a backseat driver.

1. Avoid driving with them.

Easier said than done, but if you have a friend that you know will bother you with ‘helpful’ suggestions, it’s easy to say, that “you can’t come with me because you stress me out.”

If your backseat driver doesn’t take this hint, or you find yourself with a nagging passenger while on route, move on to the next tip.

If you happen to find yourself in the driver’s seat with a passenger that won’t stop telling you how to drive, just remember to keep your cool. You are in control of a 5,000 lb weapon that poses a risk to yourself, your passengers, and others who occupy the road. Staying calm is your best option!

Yes, it’s frustrating. Yes, you just missed your turn because you were distracted. No, you can’t drive into the lake. But there are many things that you can do!

Don’t let those emotions loose and put yourself and others at risk in the process. If you keep your cool, you can finish your drive safely, or come up with a solution that doesn’t involve having to swim back to shore once your car unexpectedly ends up in a body of water.

If you get angry and find yourself in a dangerous situation as a result, no one will care that it was because of a nagging passenger. Don’t let that backseat driver win, so take control and be the responsible one. As the driver, this is your duty!

Great, you’ve kept your cool, so how do you get the backseat driver to stop the chatter? Often, the most direct approach is the best one. Calmly yet firmly tell your passenger to stop.

Try saying this phrase: “I know you’re trying to help, but your suggestions are stressing me out. It is difficult to drive safely with the distraction, so help me to ensure that nobody gets hurt. Stop backseat driving.”

If you say this in a matter-of-fact tone, the passenger will likely realize that they are causing a problem. Saying it calmly and firmly should demonstrate that you don’t want to argue; you just want the distraction to stop. Reminding the passenger that their safety is your priority should help the backseat driver to realize that their safety is in their own hands and not only the driver’s.

Some passengers will take offense to this though, and a heated argument does not belong in a moving vehicle. If you know your passenger will react aggressively to being called out, read on to the next solution.

4. Ask the passenger to do something useful.

So you’ve got a bothersome passenger and you know that telling them to stop will set off a chain of arguments. What should you do?

You could try distracting your backseat driver. Some backseat drivers nag because they simply have nothing better to do. Occupy your passenger with something like asking them to check the traffic up ahead with their smartphones, or texting your friends that you will be late to your destination. Anything that can get them off of what you are doing could be useful!

Steer them into a conversation that doesn’t involve driving, stop at a drive through and let them stuff their face, or challenge them to a high score challenge on an addicting game you have on your phone. Be creative and think up something that will keep your passenger’s eyes off of the road and help you to concentrate on driving.

This solution may or may not work for you, but it could be worth a shot. As long as you are not distracted by music while you drive, try turning up some catchy, popular music. Try to pick something that you know the backseat driver enjoys and will want to listen to. If they start to sing along, even better! It’s much harder for a passenger to tell you what to do if they are busy rocking out!

It may be tempting to crank the music so loud that you drown out that backseat chatter, but be aware that loud music can be a distraction as well. If your music needs to be so loud that other drivers are noticing from their cars, your volume is too high. Be smart about it!

This one may seem like a joke, but if you don’t want a passenger in your backseat, remove it as an option. This doesn’t necessarily mean unbolting the backseat and physically removing it, although you could if you feel the need for drastic measures. You can create an environment that would not accommodate a backseat passenger, however!

Fill your backseat with boxes, balloons, shoes, or anything you want! With nowhere to sit, those backseat drivers will need to find another driver to distract. You can even get yourself an autopilot as seen in the movie Airplane! Having an inflatable friend that will occupy an entire seat might make the back seat drivers in your life take the hint.

However you decide to deal with your backseat driver problem, be aware that you do need a solution. A backseat driver needs to be made aware that their action, while seemingly helpful, will often do more harm than good. Some sources state that as many as 1 out of every 7 accidents are a result of backseat driving. Don’t let yourself become a statistic: don’t let anyone, even yourself, become a backseat driver. Being right isn’t worth your life! Be silent and enjoy the drive to the best of your ability.