How to Get Rid of Bad Drivers

Posted on: January 29, 2009 Posted by: Nicole Harding Comments: 0
Tags: How to Get Rid of Bad Drivers 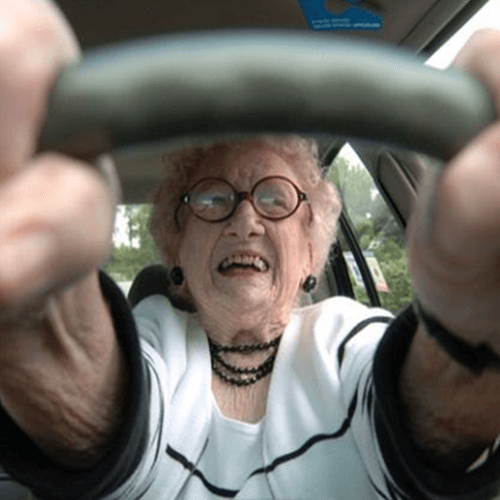 Bad drivers can really ruin your day. Don’t let them! Avoid road rage and deal with these drivers with some sensible solutions, which are explored below.

Some drivers can’t see properly, some have hearing disabilities, and some people just don’t realize that they’ve made a mistake on the road. That doesn’t excuse dangerous actions on the road, but a simple honk could easily straighten out someone else’s driving behaviour in a flash. This one’s just the first and obvious low-commitment strategy to try at the drop of a hat. Be careful with this one! Sometimes honking can get a driver who is already feeling unconfident even MORE off of their game, but it is, of course, one of the first natural reactions to bad driving.

Some drivers tailgate, others go over the speed limit, and others go far below the speed limit (which is also illegal in most places, for your information!). If the driver is swerving, nearly ran a red light, actually did run a red light, or cut you off, then you don’t want to be near them. Even if they do involve you in an accident without anything going wrong on your part, insurance companies will still raise your insurance rates in some way.

Stay behind reckless drivers. You can’t control their behaviour, so all you can do is keep enough distance to avoid the disastrous results of their behaviour. You can brake in time to avoid collisions with unpredictable drivers if you’re behind them, but you can’t stop them from crashing into your car if you’re in front of them. Maintain speed and move to the right of the lane (if you’re in the right hand lane already) so that the aggressive driver can pass you without a hassle.

Alternatively, get in front of slow vehicles coasting far under the limit. The elderly tend to drive more slowly than others, but they’re just being cautious. Patiently wait for a chance to drive around them safely. Honking at them more than once might cause them to drive even slower… just to teach you a lesson. You don’t want that; don’t anger these people. Bide your time and resist the urge to direct your anger toward them.

3. Use your wiper fluid.

Turn on your windshield fluid and wipers if an aggressive driver won’t pass you. The combination will create a mist that flies around the side of your car and lands on whatever happens to be right behind you. Not only will this help the aggressive driver to clue in that tailgating is ridiculously dangerous, but that person might get annoyed as well. Bonus tip: this works especially well on convertibles because then the mist gets in the driver’s face and all over his or her nice leather seats (although we of course would not advocate such a bold decision! Remember, YOU do not want to turn into a bad driver while you are trying to get rid of one). If the driver is unstable enough to pass you just to try the same tactic on you, then just slow down and enjoy your victorious attempt to get the angry driver in front of you, where you can manage the distance between you.

Take an alternate route if you can’t put enough distance between you and the bad driver. Turn onto a side street and take routes that are slower but safer. Don’t take high-density and high-risk routes to make up for lost time after dealing with bad drivers; you might be extra flustered without realizing it, and you don’t want to cause a near-accident like the jerk you just escaped. Most city roads follow a basic grid pattern, so you can navigate your way back to your preferred route with relative ease. The extra five minutes is always worth the safety and peace of mind!

Highways simplify driving and simultaneously raise the stakes for safety. Your options are limited, especially on country roads. Did you know that you can dim your rear view mirror to reduce glare from high beams directed at your face. Every car has a little switch at the bottom of the mirror that you can toggle with your thumb. This will save your eyes a lot of pain and soreness!

You can also pull over with ease on country roads, but avoid doing this on major highways, on which people regularly break the speed limit by 15 kilometres per hour. Merging with traffic flying at 120 km per hour will be quite difficult in a miniature lane designed for parking, especially in the winter.

6. Make the other driver’s behavior predictable.

Do this by maintaining your speed, to start. Also remember to signal early and often; lane changes, sharp turns, backing up in a parking lot, and any other situations that require you to deviate from a straight line. Check your blind spots often to make sure that you can keep that bad driver in your line of sight at all times. Know the location of the bad driver and let the bad driver know where you are at all times so that you can compensate for their poor habits. They won’t crash into you if you’re in their lines of sight. Nobody is that stupid… right?

Nobody responds positively to a middle finger, and many people succumb to a knee-jerk reaction of returning the gesture without a second thought (or any at all). Providing a friendly-yet-mocking smile accompanied with a chivalrous “thumbs-up” gesture may induce puzzlement and perhaps even personal reflection on why another person would applaud common driving practices with such enthusiasm. Never underestimate the power of sarcasm and mockery. This works much more effectively than shouting obscenities or employing other forms of antagonistic behaviour toward the aggressor. On a related note: do not repeatedly touch your brakes in an attempt to communicate your desire for tailgaters to slow down. Not only will they refuse to acknowledge it, but they will also ignore you if you actually do need to hit the brakes on short notice. Save that one for emergencies.

One of these strategies is bound to work. You can’t account for other drivers, but you can lessen the danger with these 7 methods. Honk at them, manage your distance, try the windshield fluid method (it’s quite fun), take alternate routes, let the angry driver know where you are at all times, and give uniquely positive feedback to get rid of bad drivers. If ever you happen to come across the driver’s parked vehicle, you may want to consider carrying a bad driver bumper sticker in your wallet or purse to make the most of the situation.