How to Get Rid of Bathroom Tile Mildew 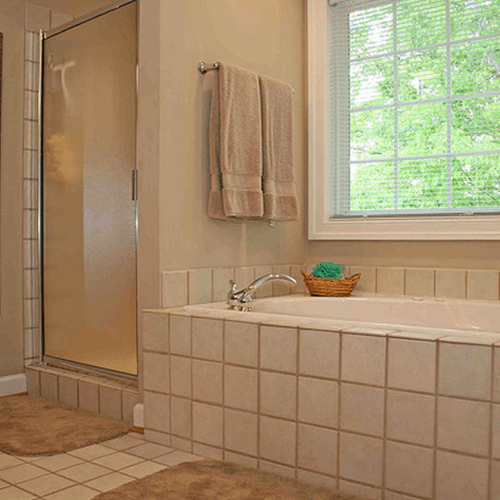 Do you have ugly spots on your bathroom tile? This is not a welcome sight for anyone, and especially embarrassing when having guests visit. Perhaps you can quickly pull your shower curtain to hide the mildew, but you will still know it is there, of course. Luckily for you, bathroom tile mildew does not have be a permanent state of being for your washroom. There are several ways you can try to get rid of bathroom tile mildew. Follow these suggestions to reclaim a clean and tidy bathroom today!

1. An ounce of prevention.

The best way to get rid of mildew is to prevent it from beginning to form in the first place. In order to deny mildew of the conditions it needs to grow, the simplest method of prevention is keeping surfaces dry.

When having a hot shower or bath, keep the ceiling fan running for half an hour to two hours afterwards, depending on the local humidity. In the absence of a ceiling fan, keeping the window open can help remove moisture in the air, especially in drier climates like Arizona.

Keeping a small squeegee on hand can also be helpful in removing excess moisture from tiled surfaces when needed. It only takes a second to quickly squeegee your bathroom tiles dry after you have finished in the shower. Simply hang a squeegee in your shower so that you will always have one on hand.

There are several mildew/mold specific cleaners on the market. Some may work better than others, so be sure to do your research to try and find a product that you think will be effective for you, based on what other users have suggested. Some people prefer certain cleaners over others because of the smells, which can be quite strong, especially to more sensitive noses.

These cleaners typically come in a spray bottle. Some instructions may say to spray and wipe, while others direct the user to let it sit for a period of time before wiping. There are even one or two out there that boast a “spray and walk away” formula. In reality though, even when using the best cleaners, nothing beats a little elbow grease. If you have a tough bathroom mild mildew problem to get rid of, sometimes it takes some hard work!

For the do-it-yourselfers there are also a few other options for mildew busting cleaners.

A bottle of ammonia can be purchased at many hardware stores, and can be a great solution for your mildew miseries! To remove mildew from the surface of bathroom tiles, mix ½ cup vinegar, ¼ cup baking soda, and 1 cup ammonia in 1 gallon of water. Apply this mixture by using a rag or washcloth to clean the surface, and then rinse well with water.

Use an old towel to absorb excess moisture and prevent a recurrence of mildew. The same mixture can also be used on painted outdoor items.

To get rid of mildew from the mold or grout between bathroom tiles, try mixing chlorine bleach and water in a spray bottle. The ratio should be 1:1. Spray the affected area and let it sit for 15 minutes. Now clean with a brush and rinse with water. Dry excess water with a towel or rag to prevent further occurrence of mildew. Even if mildew is not present, this process can brighten the space between tiles.

For those hard to scrub spots around bathroom fixtures, soak cotton balls in the 1:1 bleach mixture and place them where they are needed. Let them sit for a couple of hours for a scrub free cleaning. Don’t forget to rinse with water and dry as best as possible.

If ammonia gets rid of mildew, and bleach gets rid of mildew, then why not mix the two for a super duper mildew buster? The reason is simple, mixing ammonia and bleach will produce toxic vapors. How toxic? Put it this way, it is possible to drown while standing on dry ground. The vapors get into the respiratory tract and do some really awful things that you do not want to experience. Don’t even think about experimenting with this idea!

To really get tough with mildew you can jump straight to 3% hydrogen peroxide. You will want to wear gloves if you are using this method, of course! Hydrogen peroxide can be dangerous to you if you are not careful. Pour directly on the desired area and wipe clean. You will have no more mildew before you know it!

It should be noted that mildew, though part of the fungus family, is not the same as mold.
Mildew is a flat fungus and can grow on any surface that gets moisture on it. The key here is that the moisture is allowed to sit for a period of time. If the surface is wiped clean as soon as the moisture forms, mildew is usually kept at bay. Mold however is typically fuzzy and grows on the surfaces of organic matter. Moisture on the surface may not be a factor with mold as it can put down roots and derive moisture from the thing on which it is growing.

Mildew typically starts out gray or white and can turn to yellow, brownish yellow, or even black. Mold comes in a wider variety of colors and can display as green, blue, orange, brown, or black.
Mildew can be downy or powdery. Downy starts as yellow spots and turns to brown. Powdery starts whitish and slowly become yellowish brown, or even black.

While mold can be destructive, some forms of this fungus can have beneficial uses. Thanks to the properties of certain types of mold humankind has been able to enjoy a wide variety of cheeses, but the real upside of mold has been the medicinal properties that led to penicillin. Unfortunately, there have been no such beneficial discoveries relating to mildew. It is just a nuisance! However, you can still get rid of bathroom tile mildew fairly easily. Follow the above steps to reclaim your bathroom today!