How To Get Rid of Blackberry Bushes

Posted on: August 14, 2008 Posted by: Nicole Harding Comments: 2
Tags: How To Get Rid of Blackberry Bushes 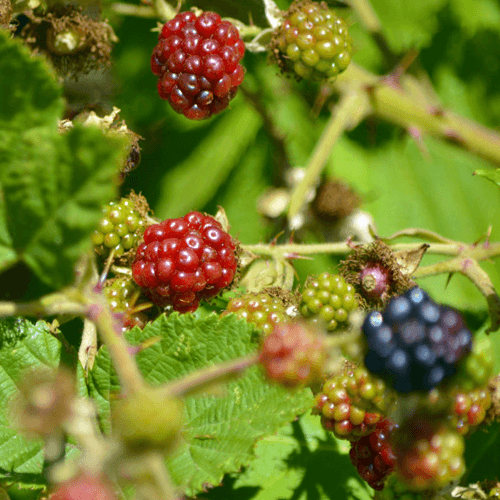 Blackberries are truly a delight to eat, whether in pies, cakes, jellies, or fresh from the plant. They are indeed heavenly, but not when they have taken over your garden or lot. Aside from their pleasurable taste, blackberry plants are a thorn in your garden—literally. Blackberry plants are prickly, grow quickly, and are really hard to eliminate. They are highly enduring: mowing, cutting, burning, and even bulldozing them will not work.

Trying to eliminate a blackberry plant only makes it grow stronger. Many gardeners have been so baffled by the strength and endurance of this plant that they have given up altogether in warding them off the garden. Do not lose hope, however, as there are still ways to eliminate nasty blackberry bushes that have taken over your garden.

Digging and cutting might help, but only when done the right way. Never ever burn the bushes, as this will only encourage them to regrow from their underground shoots. Bulldozing the bushes, as extreme as it sounds, will just make matters worse. Running over blackberry bushes with ton-heavy equipment will not kill them, and can even spread their roots and stems to more locations.

Once you see even the smallest sign of a blackberry bush growing in your garden, eliminate it. The sooner you start, the easier it will be for you. Also watch out for the close cousins of blackberry bushes, such as raspberries and rugosa roses, as they are equally tormenting.

Although you might want to keep a few blackberry bushes in your backyard for making some pies and jellies, you have to invest time and effort in cleaning up and maintaining the area. You need to guide the bushes to keep them confined to a small area. If you want to grow a blackberry patch, be sure to have an ample area for it to grow on.

Here are a few methods to get rid of blackberry bushes.

Blackberry bushes grow rapidly during the spring, overtaking other plants in the garden. New bushes can grow when prickly canes of older bushes touch the ground, which is why blackberry bushes are a total pest for anyone who likes keeping their garden neat. The bushes have huge root systems that can store food, as well as suck up underground water that other plants need. The fruits are eaten by ground animals and birds that spread seeds to other areas. Although the leaves of blackberry bushes die during winter, they grow back the next season, so be wary of them.

When You Dig, Dig Deeper

If you dig the roots of blackberry bushes lightheartedly, chances are, you will just spawn a regrowth of even stronger bushes. Lightly digging through the roots of blackberry bushes only stimulates the suckers, which in turn encourages the plants to branch more. Continuously digging through the roots of these persistent bushes while repeatedly tilling the ground will bring you success. Make it a habit to continue the digging until you have eliminated all the nasty regrowths.

When You Cut, Cut Diligently

Cutting blackberry bushes is as non-helpful as lightly digging through their roots. The only way to cut blackberry bushes is to cut them off completely—roots, stems, and everything! Reach under the stump of the bush, and then carefully cut off each small root that meets the stem of the bush. Once you have cut each of the roots completely, pour boiling water over the area. If you continue to cut up and pour boiling water over the bushes, sooner or later, these bushes will rot.

Pesticides CAN Help, But are NOT the Only Solution

Hold it there, exterminator. Before reaching for a pesticide or herbicide, try cutting, digging and pouring boiling hot water over the bushes first. It indeed takes time and patience, but your effort will be greatly rewarded. If you want to try the fastest, effortless way because you are just about to give up on eliminating the blackberry bushes, then by all means, rush to the gardening supply store nearest you.

Herbicides such as glyphosate, also called Roundup, as well as triclopyr, known as Brush-Be-Gone, are two of the more popular ones used to kill blackberry bushes. In general, the best moment to apply herbicides is when the sun’s heat is up, as plants go through photosynthesis during this time.

When planning to use herbicides, follow the instructions carefully, since they can be poisonous. Remember not to spray herbicides on the fruit of the blackberry bushes, as people might mistakenly pick and eat them. Apply herbicides at the right time and you are sure to get a high likelihood of success. It is also wise to start using herbicides on younger bushes as well as sprouts that have just popped up.

Blackberry bushes are very persistent—this is one thing you always have to keep in mind. As a rule, the best way to defeat blackberry bushes from taking over your garden is to be even more persistent than they are. If you have started your work of eliminating them, continue with it until the bushes are completely gone; otherwise, you will lose everything you have done, and will end up starting over. Remember the main rule: never give up on blackberry bushes.

Remember to start early with your quest for eliminating blackberry bushes. The larger the blackberry patch in your garden, the harder it is to eliminate the nasty growth. If you are too lazy to work on killing the bushes, think it over. When it comes to blackberry bushes, you absolutely should not procrastinate. If you enjoy learning this article, you’ll surely enjoy learning how to mow the lawn and how to pull weeds.