How to Get Rid of Bleeding Gums

Posted on: October 9, 2008 Posted by: Nicole Harding Comments: 0
Tags: How to Get Rid of Bleeding Gums 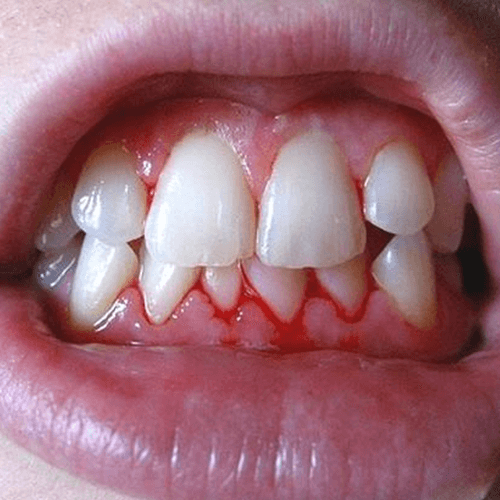 Bleeding gums can be an early indicator of gum disease, including tartar build up or gingivitis. This can be a serious problem. Fortunately, there are a number of treatment options for gum disease that will eliminate gum disease. It is important to start treating gum disease as soon as possible to avoid permanent damage to your oral health. The following is a list of ways to get rid of bleeding gums and help you prevent gum disease.

Disclaimer: If you follow the following steps but are still not experiencing results, then it may be time to try some more serious treatments, or there may be a more serious problem taking place. Always consult with your dentist first before beginning any new treatment, and see your dentist if your bleeding gums problems continue.

Even though you often ignore your dentist’s pleas to brush, a twice a day routine can work wonders for your oral health. Buying a soft bristle brush is also recommended in order to reduce irritation and gum recession.

Make sure you are adopting the correct technique as well. Many people think that vigorously brushing back and forth is the best way to get their gums back on track. Wrong! The best tactic is to use your toothbrush in a downward motion for your top teeth and an upward motion for your bottom teeth. Brushing back and forth makes your gums worse off, not better. Remember your soft bristle toothbrush as well. This is a key step!

Flossing should be an essential part of your brushing routine as well. Flossing reduces tartar build up in between your teeth, which causes cavities and gingivitis. You can even get flavoured floss for your kids, or for anyone who hates flossing! This can help make the process slightly more manageable.

Flossing is nobody’s favourite activity. But it can save you a lot of hassle in the long run, and a lot of money as well if you stick to it! Gently slide a piece of floss between your teeth. Do not use force! This is the wrong approach, and you are not likely to help yourself get rid of your bleeding gums by doing so. Once you have inserted the floss, gently slide it up and down between your teeth to remove any tartar or plaque build-up between your teeth. Flossing is a great way to keep your mouth healthy and help to treat gum disease early on.

Find a mouthwash that’s right for you. Often consumers are overwhelmed by choice and dentist recommendations through advertising for the right mouthwash to use. Yet not all mouthwashes are the same, and not all will be right for your mouth.

Alcohol based mouth rinses can be effective for some individuals, but can also be irritating for those with sensitive gums. Always talk to your dentist about which rinse is the best option to treat your symptoms. Mouthwash is a great idea to use because it is a fairly easy strategy to keep up with and anyone can keep up with it. Along with brushing and flossing, using mouthwash can help you with the bleeding problems your gums are experiencing.

Perhaps our parents always made you brush your teeth after eating, so you’ve just continued the habit. However, the food you eat, especially sugary foods, softens your teeth and gum tissues.

Brushing immediately after can do damage to these tissues and lead to excess gum bleeding. Always wait at least one hour after eating before brushing your teeth. If you stick to the twice a day routine for brushing your teeth, always be sure to brush immediately when you wake up and then again before you go to sleep at night. As long as you didn’t have a very late night snack, this should be a good strategy!

Dietary and consumed substances have a major impact on oral health. Smoking alone is one of the leading causes of gum disease, and pro-longed alcohol use can dry out gums, causing your bleeding problems. Smoking is not just bad for your gums, but is bad for you in general! As difficult as it is to quit, weigh the good against you bad, and you will find that smoking is not doing you many favours at all.

Sugary foods, such as chocolate snacks and pop can be just as damaging to your oral health. Avoiding these substances can go a long way to getting rid of bleeding gums and preventing gum disease.

6. Visit your dentist every 6 months.

Without seeing your dentist for a semi-annual check-up, all of your efforts might be useless. Dentists can make expert recommendations, and dental cleanings scrape away tartar build up. New laser technology has also allowed dental professionals to directly target gums and eliminate bacteria, reducing the need for scraping of your teeth, which often irritates your gums (and does not feel nice either, for anyone who has been through this before!)

Going for a cleaning regularly can make a huge difference in your oral health, even if you are in the majority of people who hate going to see the dentist. Excess bleeding for one day at the dentist can lead to much less bleeding in the future.

Nobody wants bleeding gums. Especially as this can lead to gum disease! If left untreated, gum disease can lead to a number of unfortunate symptoms including gum recession, bad breath, and tooth decay. More importantly, the oral health problems caused by gum disease can lead to social problems in both your personal and professional life. Who wants that! Follow these steps to get rid of your bleeding gums. There is no such thing as a temporary fix for bleeding gums. Remember that you need to stay on track of your diet or all your progress will be for nothing. Changing your diet, your brushing and flossing tactics, and your visits to the dentist can go a long way to create long lasting healthy gums. Does that not sound better than bleeding gums? Good luck getting back on track!