How to Get Rid of Box Elder Bugs 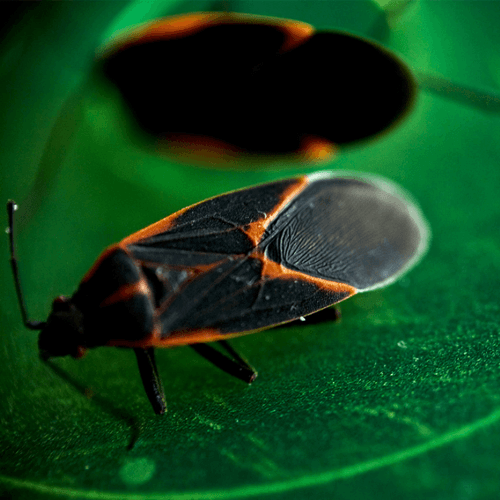 Box Elder bugs (a.k.a. Box Elder Beetles) are something of a nuisance in and around homes throughout the US from fall through early spring.

The adult box elder is about a half inch long and a quarter inch wide. You can find them just about anywhere in the United States, but they only congregate in large numbers when there’s a female box elder tree in the neighborhood. Whereas they eat a variety of plants, this bug’s version of pizza, steak, and shrimp dinner is the seed pod from a female box elder. Yum! The most effective and permanent way to eliminate the bug, therefore, is to remove any female box elder trees you find nearby, but this solution may be unacceptable for a number of reasons. Full-grown, winged adults can fly for distances of several blocks, so boxelder bugs may also migrate into your home from a neighbor’s tree.

Are Boxelder Bugs Bugging You?

Luckily, box elder bugs are not potentially dangerous like mosquitoes, house flies, or wasps. They represent little more than an eye-sore. The worst that can be said for the bugs is that they infrequently stain light-colored surfaces, including draperies, with their feces, and if you should step on one, it stinks to high heaven. That’s typically the extent of their offensiveness. But, if you take pride in your yard, having half of your property covered with these insects certainly is annoying.

If you’re trying to run an orchard, you might prefer that they move a couple of states away: they sometimes feed on the fruits of grape arbors and almond, apple, cherry, peach, pear, and plum trees. Their feeding punctures the fruit and causes it to become deformed. And shoppers tend to reject a deformed fruit. However, the damage is really minor, and only the most finicky peach and pear eaters will ever notice it.

That stench mentioned above is a foul odor they also emit when attacked, and the only known natural predators of these insects are less pleasant to have around than the bugs: rodents and geese, for example.

So How Do You Get Rid of Boxelder Bugs?

If boxelder bugs frequently invade your home, identify and seal up their entry points. Repair torn screens and close up cracks around doors and windows as well as attic or basement vents. Use caulk, weather-stripping, fine-mesh screen, or expandable foam. Vacuuming them up and dumping them can eliminate most, and spraying them with a mixture of water and laundry detergent will kill them. Wash them off exterior walls and tree trunks with a pressure hose.

If your infestation is caused by a nearby female box elder tree, the only way to eliminate the bugs is to eliminate the tree. All other approaches are temporary. Insecticide use is rarely justified or effective. If you can’t discourage them through the destruction of the tree, try clearing the fallen seeds from the area. Use a shop vacuum to remove seeds from hard surfaces such as patios and driveways and also seeds from grassy areas. Rake leaves and remove weeds and grass from a 6 to 10-foot-wide perimeter around the foundation, particularly on the south and west sides of the house. Should the box elder tree be on your property and you don’t want to get rid of it, have a professional tree sprayer spray it each year in preparation for the spring season when the female bugs lay their eggs on the leaves.