How To Get Rid Of Cirrhosis

Posted on: November 25, 2008 Posted by: Nicole Harding Comments: 0
Tags: How To Get Rid Of Cirrhosis 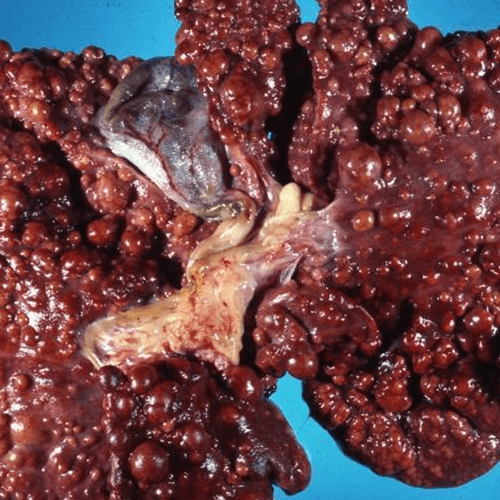 The liver is one of the most important organs in the human body. Among its many functions are making proteins needed for the body, waste elimination, producing cholesterol, and the storage and release of glucose energy. The liver also metabolizes many drugs used in medicine. More importantly, the liver produces bile that is useful for digesting food. The liver also has the remarkable ability to regenerate if it is injured or a part of it is removed. There will be times, however, when an injury to the liver can cause complications. In such cases, you will have is called cirrhosis of the liver.

Cirrhosis is a chronic (meaning long-term) disease of the liver that causes irreversible scarring of the organ. When the liver is damaged or injured, scar tissue replaces the normal tissue that is lost, during which blood flow through your liver is affected. If the damage is continuous and is not stopped over time, the liver gradually loses its ability to carry out its functions properly. In very advanced stages, the only resort would be to have a liver transplant.

There are a number of conditions that can cause cirrhosis. The primary cause of cirrhosis in many developed and developing countries is rampant alcohol abuse. Excessive alcohol can damage all living cells, especially the liver which filters such substances from your bloodstream and breaks down alcohol into highly toxic chemicals. Some of the chemicals cause inflammation that will eventually destroy the liver cells, leading to scarring. The severity will depend on how long you have been abusing alcohol. Alcohol cirrhosis usually happens after a decade or so of heavy drinking, although how much alcohol is required to injure the liver permanently will vary from person to person.

Some diseases can also be causes of cirrhosis. Chronic Hepatitis B and C are good examples; in fact, C is the second most common cause of cirrhosis, next to alcoholism. Hepatitis causes an inflammation of the liver which damages it over a period of years. Most hepatitis are caused by viruses (viral hepatitis) but your own body can cause it as well, in what is known as autoimmune hepatitis. Aside from this, some inherited diseases are also culprits. These include certain diseases that can cause unusually high concentrations of minerals to accumulate in the liver, such as Wilson’s disease (high production of copper) and hereditary hemochromatosis (high levels of iron).

Cirrhosis takes years, even decades, to develop. There is usually no outward or sudden symptoms during this time. However, those suffering from cirrhosis tend to be overly tired or fatigued, suffer from weakness, and have loss of appetite and sex drive. Once complication sets in, more tell-tale signs and symptoms start to appear. Among them:

Getting Rid of Cirrhosis

Damage to the liver cannot be reversed by any form of treatment or self-help. However, if controlled at an early stage, the liver can heal itself without any complications. If you’re suffering from cirrhosis, here are some things you can do to reduce further damage to your liver.

Your liver is an indispensable organ, and while you can have it replaced via a liver transplant, good livers are still hard to come by. Take good care of it by having a healthy lifestyle, and you can assured that it will serve you properly until the end of your days.

Click here for more information on how to get rid of cirrhosis.