How to Get Rid of Clutter 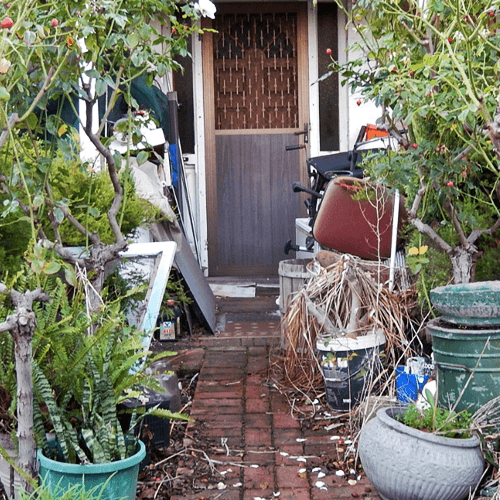 What, you may ask, is so wrong with clutter? We can’t all be “neatniks,” nor would we even want to be the Felix Ungerer type. No, but that doesn’t mean we necessarily have to be the other half of the Odd Couple – the Oscar Madison sloppy side.

It’s true that excessive neatness and orderliness can signify a person with an obsessive-compulsive disorder (as can a person who compulsively hoards stuff); on the other hand, chronic clutter can be an indication of a person troubled by clinical depression. The depressed individual lacks the drive to keep things in order. What makes it even worse for the depressive is that clutter makes the condition even worse! So, if you go to one extreme or the other and you, or a loved one, are concerned about this behavior, you might want to make an appointment with mental health professionals to get them to take a look under the hood.

As for others of us, who so hate keeping order that we would rather get a root canal than have to tackle any kind of mess (but, unfortunately, can’t learn to love the mess, either), what do we do?

Take a swift survey of the mess. You’ve got to make a decision. If you lack space for all the stuff you’ve accumulated, you’ve either got to start looking at the “home for sale” ads to move the clutter into a bigger place or start getting rid of that stuff. The second option usually looks better, but what a daunting proposition! How can we cope with the enormity of this task?

Thou Shalt Not Clutter

The first Commandment for clutterbugs is a variation on the Alcoholics Anonymous mantra, “one day at a time.” Attacking one bit of clutter at a time doesn’t seem so overwhelming as taking on an entire universe of clutter. Get one thing out of the way, then go on to the next. You can even make a list of tasks and check them off as you complete each one, if that helps. Narrow down your workload to say, one room or one corner of one room, and set a block of time for dealing with it. Examine every item in that area and make a decision – it stays, it goes to charity or to a garage sale, or it just gets tossed. If you’re not finished by the end of the time limit, decide whether you want to go on or stop until the next session you schedule. Reward yourself for a job well done.

The second Commandment is “everything in its place, and a place for everything,” as someone once said, probably your mother while surveying your childhood bedroom. Everything you own should either be properly displayed or hidden away. If it isn’t, you’ve got to buy or make a home for it – a bookshelf, say, a closet, or a knickknack shelf, someplace where you can put things when you’re done using them and a better place to display things than the bathroom countertop.

If you need inspiration or some tips on handling clutter, there are dozens of Web sites that will help you get clutter out of your life. Sandra Felton, the Organizer Lady and founder of “Messies Anonymous,” for example, provides help for the neatness-challenged. You can also find consultants, on-line and in the phone directory, whom you can hire to help you clean up the clutter; some, like Michelle Passoff, have moved on from consulting to leading seminars or writing books. Hers is titled “Lighten Up! Free Yourself from Clutter.” Like so many others who have written on the subject, she stresses that physical clutter is usually a sign of emotional, mental, and spiritual clutter. For her, attacking physical clutter is a form of therapy that leads to freeing people from all the other kinds of disabling clutter in their lives.

A book can be helpful, but don’t think the first thing to do is buy a book on how to get rid of clutter – and there are dozens of them to choose among. You had first better be motivated to take on the challenge; otherwise the book could become another part of the clutter. Because, let’s face it, the reason the clutter is there is because you (we’re guessing) created it and you lack the will power to deal with the task of eliminating it. If you aren’t wealthy enough to pay someone else to do it for you, then, what you are probably going to need is a friend or two. Call them. Tell them you need help in clearing the mess. Why? It’s because you’re having a party for your best friends, a de-cluttering party, and you are providing the food, drink, and entertainment.

Okay, maybe now you’re ready to get going on your project. But there is still that eternal nagging voice in the back of your head saying “If I throw stuff out now, I know that someday I’ll need it.” Sharon Crosby, in “Fear of letting go of clutter” suggests that you make a list of your various possessions, even ones you are now using, and rate them, 1-to-10, as to how much they are making your life easier, better, or happier. Get rid of the ones that don’t.

According to Life Organizers.com, a source of much good advice on dealing with clutter in every area of everyday life, your goal should be to simplify your life. “If you have lots of clutter, there’s no doubt you’re feeling lots of stress.” If you don’t use it, you probably don’t need it, and you probably should get rid of it. Give it away to charity or friends, hold a garage sale or, as a last resort, just toss it out.

Click here for more information on how to get rid of clutter.