How to Get Rid of Fart Smell

Posted on: February 19, 2009 Posted by: Nicole Harding Comments: 9
Tags: How to Get Rid of Fart Smell 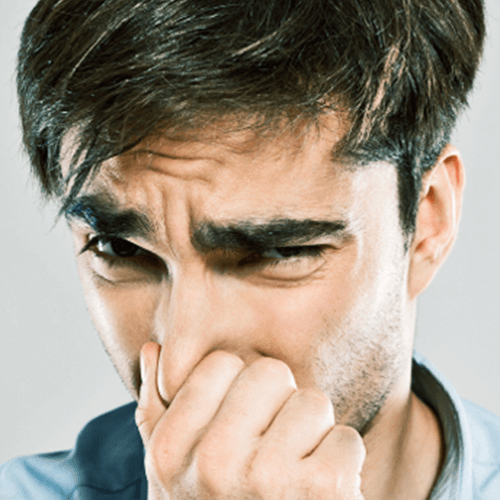 Whether it’s a loud blast or a quiet whiff, or whether it came from pickled eggs or a three-bean burrito, farts don’t stay funny for long. The awful smell of farts lingers in the air, making a room an uncomfortable gas chamber of rotten scents and odors from the very bowels of the human body. If you don’t have a thing for the didgeridoos from down under or the oboes from below, or if you simply can’t stand the smell of a fart, then here are some ways to get rid of the offensive odor.

People will argue over who has the smellier butt-bomb, but the fact remains that everybody farts. Flatulence is a normal bodily function, where gas that builds up inside your digestive system is expelled through the rectum. Gases that build up eventually have to be released somewhere. Some gas may be released through burping, and the anus is the other end that the built-up gases from digestion are released from.

Flatulence is an involuntary action, although it is possible to hold the gas until you’re in the bathroom or you’re sure nobody will smell it. Flatus gases are mostly composed of odorless gases like nitrogen, hydrogen, methane, and carbon dioxide. The offensive odor in farts from a gaseous chemical called hydrogen sulfide, which smells a lot like rotten eggs. Another chemical found in flatus, butyric acid, smells like rancid butter.

Now that you know a bit more about flatulence, it’s time to freshen things up after a big stink bomb. (Prank your friends, Learn how to make stink bombs)

Like all foul odors, farts will eventually break down and go away on their own. Like any gas, the chemical compounds in flatus are very loosely bound together and dissipate as they flow through the air. Depending on the strength of the odor, most healthy people who eat a balanced diet pass gas that does not have an extremely unpleasant scent. Everyone is bound to have the Mother of All Farts at one point in their lives, and you never know when that bowl of chili will make everyone feel they need gas masks.

Some people may get really embarrassed when you point out the stink in the place. Flatulence is a reflex action, and everybody accidentally farts in a public place every once in a while. If you overreact and act too obnoxious about the small accident, people may find that your attitude stinks more than the fart. Be sensitive and polite when dealing with a fart; after all, you also do the same thing.

The best thing to do is to discreetly wave away the offending scent with a folder or an envelope, or to discreetly cover your nose if someone breaks wind inside the elevator. The important thing to remember is that the repulsive smell of flatus gases do not last forever. You’re better off hurting your sense of smell with a small fart than hurting someone’s feelings with an insensitive joke.

Free Up the Air

Some flatus gases do not decompose as quickly as expected, and may linger around in the air for quite a long time. The trick is to get the air inside the room flowing again, and either carry the air outdoors, or hasten the breakdown of the smelly gases. You can do this with the following steps:

If you work in a cramped office or if you’re inside an elevator, discreetly spray a bit of cologne or air freshener to mask the strong, musky odor. A little bit of fragrance will go a long way; sometimes the very powerful scent of cologne or air freshener can irritate some people just as well as farts can. A few spritzes should be enough to mask the odor long enough for people to get used to it.

Light a Match… But Be Careful

For those fart smells that won’t go away no matter how much you fan the offending odor out, you may want to use the time-tested remedy of lighting a match. Methane is an explosive substance that carries the foul-smelling sulfide molecules. Once you burn out the trace amounts of methane in the air, the sulfides also decompose. An open flame is the easiest and fastest way to remove the noxious odors from flatulence.

When you light up a flame to get rid of that funky flavor spewed by your neighbor, you only need a few seconds of open flame to fully decompose the methane. Flatus gases are quite heavy, and you can easily burn the methane molecules that carry the offensive sulfide molecules and the butyric acid gases.

You may have seen comedy movies and sitcoms where people literally light flatus gases. Pranksters sometimes expose a cigarette lighter or an open match to light up the combustible gases. Methane releases a blue-hued flame when ignited. While it may seem like a good idea, the concentrated amounts of methane could literally go ablaze. Do not, under any circumstances, expose your naked rear to a flame like a bonfire, campfire, a lit cigarette lighter, or a match.

Besides, literally lighting a fire underneath you is not a good idea. You may risk serious injury to your bowels and your genitals, and you may also inflict burns on your bum. The best way is to light a match, and wave the lit ember around to get rid of the smell.

Use a Water Bath

When you drop your load on the commode, the water in the toilet acts as an effective way to trap odors. If you have a problem with smelly flatulence, or if you had one too many jumbo tacos at a Mexican restaurant, it helps to keep a few bowls of scented water to help absorb the foul stench. The bowls also add a nice touch to your bathroom.

Here are some ideas on how to make these scented water bowls effective at trapping odors:

Pack the Power of Plants

Plants thrive on carbon dioxide, which is part of the gases found in the flatus mixture. Carbon dioxide is harmless and odorless, although it does carry molecules of hydrogen sulfide and butyric acid. Unlike methane, carbon dioxide does not go away when you expose it to an open flame.

Potted plants and flower boxes are a great way to eliminate carbon dioxide, and help get rid of flatus odors as well. Plants use carbon dioxide and sunlight to make food in a process called photosynthesis. Yes indeed, plants do need the power of your farts in order to survive.

Farts may be comedic, but they can also be embarrassing. While people eventually get used to the nitrous from the anus or the anthem of the rectum, the smell of flatulence is still quite an unpleasant odor. Whether it’s silent or violent, farts do not have to stink up the place for too long. Once you’ve gotten rid of the smell from your body’s explosion of the H-Bomb, it doesn’t do any harm to look around for who did it. If you enjoyed reading this article, you’ll surely learn from reading how to get rid of flatulence.