How to Get Rid of Fleas 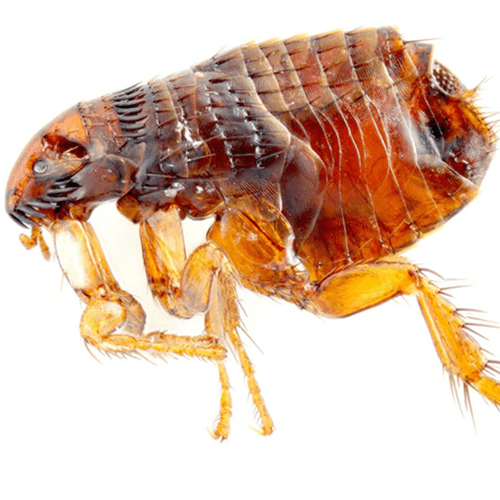 Adult fleas feed on the living blood of mammals and their young feed on dried blood that has been defecated by the adults. Pretty nasty, huh? Read on and we’ll conquer these nasty little insects together.

1. Destroy fleas in the environment

Fleas live on their host, but eggs can be left both on the host and in the host’s bedding. The eggs that are left on the host will fall off and accumulate in beds, clothes, carpets, cars, and anyplace that the host visits. These eggs normally hatch in 1-2 weeks, after which the fleas emerge as larvae that can live in carpets (learn how to get rid of carpet fleas) and bedding for up to 200 days before transforming into legless pupae. If conditions are still not quite right, the pupae can sit dormant for over a year before transforming into an adult! This means that many generations of flea eggs can accumulate and lead to a mass-infestation!

The first step after infestation is to clean everything that has come into contact with the infested persons or animals in order to remove as many eggs and larvae as possible. This section will walk you through this process.

2. Flea removal from people and pets

Once the environment has been thoroughly cleaned, move immediately to it’s inhabitants. Following are details for removing fleas from people and pets.

Please be very careful when applying flea treatments to yourself and your pets. Only use treatments that are meant for the animal you are going to use it on. Flea treatments meant for dogs and the environment can easily KILL cats. Also keep in mind that any insecticide is designed to interfere with natural biological processes – to kill.

Allergic reactions to flea bites in humans are usually manifested as dermatitis, skin lesions and mild to severe itching (Learn how to get rid of flea bites). These symptoms can be improved by applying ice, menthol, camphor or calamine lotion to the bites. Over the counter insect repellents that contain diethyltoluamide (DEET) will repel fleas and lessen the frequency of bites. Apply repellents only to clothing, never to skin and never to your pets. Vitamin B1 taken orally has also been proven to repel fleas, so start taking a B-complex multivitamin. If your allergies are really bothering you, go see your doctor about getting flea saliva allergen treatments to lessen or eliminate the allergy altogether.

Pets that are allergic to flea bites will exhibit hair loss, usually around the base of the tail and often accompanied by relentless chewing of the area, often until it becomes raw. Pets can become allergic to flea bites because of poor health or poor nutrition so make sure your animal is getting plenty of protein and a balanced diet.

3. The flea control and elimination routine

You’ve waged the massive assault described earlier and exterminated the majority of the fleas, you must now follow up with a strict routine in order to kill off the remaining stragglers and ensure that they remain under control. You must be more efficient at killing the remaining few then they are at reproducing. This section will show you how to accomplish this, step by step. Keep up these practices for a few weeks after you stop seeing fleas to ensure success.

The previous steps are usually enough to eliminate and control fleas, but in some extreme cases they can still be insufficient. If this describes your situation then consider the following in addition to the previous list:

If this still isn’t enough, it’s time to call a professional and put the task in their hands. You’re probably exhausted anyway!

Please folks, consult your vet before using anything other than soap and water on your pets, some animals are very sensitive to this stuff and can get very ill or even die. All-natural flea control products derived from plant oils and crushed flowers can be just as toxic as chemicals so be careful, pets are family too.

IGR’s inhibit the natural growth processes of insects and can last for up to 200 days. These products will keep eggs, larvae, and pupae from evolving into adults, but will do nothing to control pre-existing adults. Methoprene (FleaTrol and Precor) and Fenoxycard are two popular varieties. Use these only with the complete control routine outlined above – they are not enough by themselves.

Citrus peel extracts are among the safer treatments, but you need both limonene and linalool to kill fleas in all 4 stages of growth so make sure you choose a product that contains both of them. Use these for spot cleaning and beddings, but not entire rooms or outdoors. Use only EPA registered products directly on people or pets, as a poorly refined citrus extract can cause harm and even the death of your pet. Always consult your vet first.

Sorptive dusts kill fleas by dehydrating them, they absorb their moisture and damage their bodies. These dusts can be applied to carpets and animals but will irritate the lungs so wear a dust mask when applying and keep it out of your pets face. Diatomaceous earth is a popular and effective variety. They work well when applied to carpeting and pets (Don’t forget to get between the toes!). Short haired pets should get one dusting, long haired pets may need a second. Afterwards they should be limited in their mobility for a few hours to allow all of the fleas to contact the dust, otherwise the pet may dissipate too much dust through normal activity. Wait at least a week before wetting or washing the animal. After dusting your pets, vacuume and apply the dust to their usual resting locations, bedding, and travel routes. As with any flea treatment please consult your vet before applying to your pet, especially with cats who will lick much of it off of their fur.

Pyrethrins is derived from the chrysanthemum cinerariaefolium flower and is one of the least toxic flea control products available. Unfortunately it is often packaged along with the somewhat more toxic chemical piperonyl butoxide which can cause severe health problems in humans. Make sure any product you use does not contain piperonyl butoxide. Also make sure that the solution contains no more than .04% active Pyrethrins. Higher levels can cause serious reactions in pets.

Flea collars work by constantly emitting poisonous vapors that kill any fleas on the animal. Unfortunately, these vapors can also be harmful to the pets and people that they are supposed to protect so use them sparingly and only for as long as needed. When not in use, store them in a tightly-sealed container in a cool, dry place. If you are putting a flea collar on your pet for the first time, check his or her skin underneath the collar often for any reaction.

Beware of ultrasonic devices, there are several out there that claim to eliminate insects of all kinds, including fleas. A study was conducted by veterinarian M. W. Dryden that proves that these devices do not work. Don’t waste your money.

579 People reacted on this