How to Get Rid of Garbage Disposal Smell

Posted on: May 24, 2008 Posted by: Nicole Harding Comments: 5
Tags: How to Get Rid of Garbage Disposal Smell 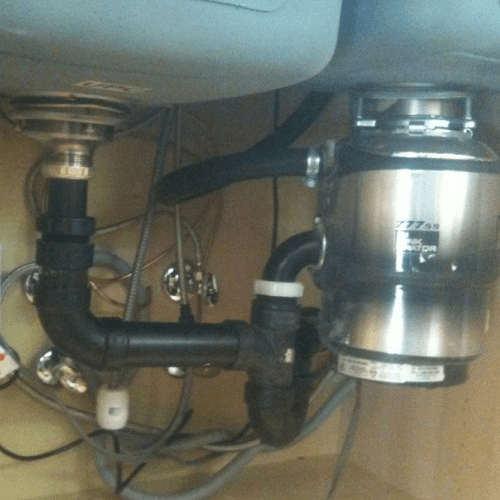 Almost any kitchen today has a garbage disposal unit or “garburator”. A simple, electrically-powered device, this is often seen under kitchen sinks, between the drain and the trap. A garbage disposal unit works by shredding food waste into tiny pieces, allowing them to pass through the plumbing without any difficulty.

Garbage disposal units eliminate garbage, but what if it’s the one that’s actually causing the problem? Sometimes, these mechanisms emit an unpleasant odor that can spread throughout the kitchen. The smell comes from old food that gets trapped on the splash guard or in the crevices, allowing odor-causing bacteria to form.

The Most Basic Tactic: Use Running Water

The most basic solution is the one most neglected by many people. The odor problem caused by garbage disposal units, stems from food residue that hasn’t been washed down properly. To solve this dilemma, always keep the water running, so the tiny bits of garbage will still go down properly. Even after the disposal has finished it’s job and turned off, allow the water to run for at least 30 seconds more. Continue doing this, and you’ll soon realize the smell is nothing but a thing of the past.

Here’s another running water tactic you can try: every month, fill the sink’s disposer with hot water, along with 1/8 cup of grease-cutting dishwashing liquid. When the sink is full, release the stopper, and turn the disposal on while allowing the hot water to continue running. This method will clean away the grime and grease, as well as clean the pipes out.

The main reason why you have a smelly disposal unit is you fail to maintain it properly. Just because it eliminates garbage doesn’t mean it doesn’t need cleaning. In fact, that purpose makes cleaning this device more important. It’s pretty easy to clean a garbage disposal unit, as long as you know the proper tactics.

A few tips to keep in mind:

Once you’ve finished cleaning, it’s now time to deodorize the whole unit. You can do this using the tips below.

If you want to use a commercial product for your garbage disposal, you can buy a deodorizing agent or deodorizer. These chemicals are specifically made to target various cleaning and deodorizing problems. Popular examples include Nature’s Miracle, Proclean, Bane-Clean and Renuzit. Use them according to the directions specified on their packaging.

The only drawback of these products is they can be pricey. If you don’t want to spend a lot of money for deodorizing your disposal, then opt for cheaper, around-the-house remedies instead.

Vinegar’s deodorizing property for various housecleaning tasks is well-known among many people. It can eliminate bacteria well, and remove unpleasant odor. Vinegar is also a safe product, so you won’t have any problems using it. Here are two ways how you can use vinegar to clean and deodorize your garbage disposal.

Citrus Peel For A Citrus-y Scent

If you’ve just finished cleaning your garbage disposal unit, but you realize there’s still a lingering smell left in it, this is one tactic you can turn to. Citrus peel lets you save money that you should have spent on expensive deodorizer chemicals. Just toss a few orange, lime or lemon peels into the unit, to give it a fresh citrus aroma. Try to do this every two weeks, along with proper cleaning. Your unit will never develop a bad odor.

Another effective method is to use borax with citrus. Get your choice of citrus, and slice half of it into small pieces. Let the water run while dropping the pieces one at a time. This should take at least 40 to 60 seconds. When you’ve sent all the pieces down, disinfect the area by using ¼ cup of Borax to flush it down. Do this method every other week.

This is another all-around cleaning material that can be useful for your garbage disposal dilemma. Bleach works well for removing stains, but it’s also great as a cleaning and deodorizing agent. First, plug your drain, and fill the tub with water, along with a small amount of bleach. Get your rubber gloves, and start mixing the water and bleach around. Pull the stopper out of your drain afterwards. The disposal will be flushed out, along with the nasty odors.

A nasty smell coming from your garbage disposal is always a no-no. It gives your kitchen an unkempt feeling. When you get a whiff of these nasty smells, try the tactics above. You’ll make your disposal unit more efficient and bring back your kitchen’s sweet and homey atmosphere. If you liked this article, you’ll surely like how to clean your house the green way.