How to Get Rid of Garden Moles 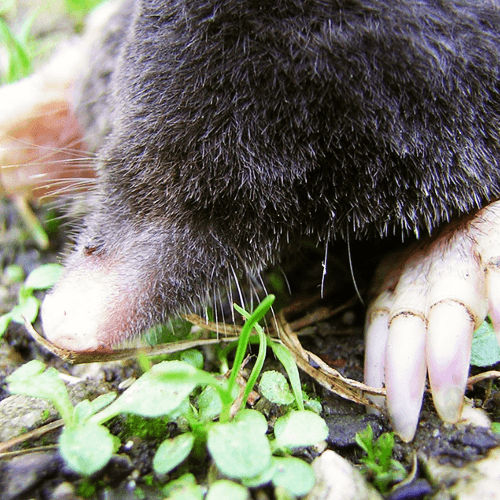 It’s easy to make a mountain out of a molehill when a mole comes and destroys your garden. These little furry animals live underground and spend their days burrowing through the soil. They are mostly blind and their eyes are sometimes covered with fur or skin. In fact, Darwin once used the mole as an example of a species that phased out an organ because they did not use it enough. He said that functioning eyes were not advantageous to a mole who lives underground, so today they are almost completely blind. While moles are typically harmless to humans, they can do a number on your garden. They push rocks up to the surface which can damage tractors and other equipment. They often damage drainage systems as well. Plus, other animals such as weasels can use mole tunnels to get into fenced off areas. (Learn how to get rid of weasles)

Are moles all bad? Their constant digging helps to aerate the soil and their diet of invertebrate animals means they don’t eat your plants or their roots. However, they will push up small piles of dirt called mole hills which can quickly ugly up your well-kept lawn. In India, moles are considered disgusting animals. In fact, calling a man the Hindi word for mole means that he is a filthy coward. In England, the death of William III is blamed on a mole. The rumor is that William III died after he was thrown from his horse when it tripped over a mole hill.

Getting rid of Garden Moles

The good news is that moles are not social animals, so you usually only need to get rid of one of the little suckers to end your troubles.

First, scavenge your property and locate as many tunnels and holes as you can, then find out which tunnels the mole uses frequently by destroying part of the tunnel and waiting to see if the mole fixes it. If he does, then you know this is a tunnel he likes. You can use this to your advantage by setting a trap in this tunnel. You don’t need a trap to catch a mole though. Many times you will see him traveling right under the surface of the ground and you can catch him with two shovels, pitching one in the front and one behind. Once you have him, place him in a covered bucket or trash can and take him far away from your property.

There are other ways as well. You can use mouse traps to catch moles as they are about the same size as a large mouse. You can try mixing oil soap, castor oil and cayenne pepper together and then dilute it with warm water. Spray this mixture over and in (where possible) the mole’s underground highways. Flood his tunnel system using this solution and a water hose. The soap will cause the castor oil and cayenne pepper to stick to the mole’s skin which in turn will cause him to itch and burn. He will not want to hang around your property much longer.

You can also try using fox urine or placing human hair down in the holes. Both can work to repel a mole. Plain castor oil gives the moles an upset stomach which might encourage them to leave. You can also poison them with mole pellets that you drop down their tunnels. Getting an outside cat to roam around your property will probably just send the moles to someone else’s yard.

To prevent moles from damaging your garden place wire mesh in the dirt before you start planting. The roots of your plants can still go through the mesh, but the mole will not be able to destroy the plants by uprooting them. Of course, this is best done when you are first planting a garden  and does not solve an existing mole problem.

Although moles can be destructive, there is something to be said for just letting them stay in your yard. They do work to aerate your soil and kill grubs that might harm your lawn and garden (See how to get rid of grubs). They usually won’t stay very long in one place, so it might be worth just waiting it out until the mole runs out of food and moves on.

81 People reacted on this