How to Get Rid of Groundhogs 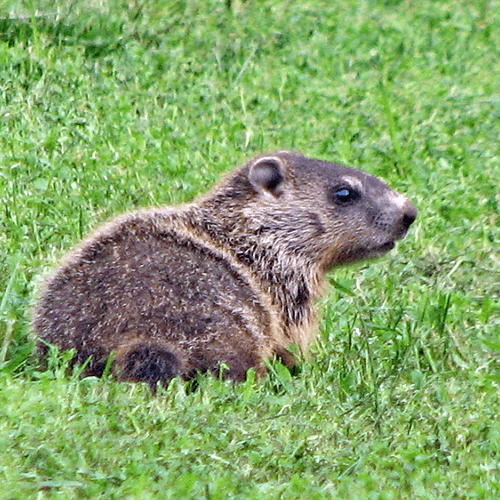 Groundhog, woodchuck, or whistling pig – they all amount to the same thing: a cute, furry pest. The genus, Marmota monax, known best through its weather-predicting spokesperson, Punxsutawney Phil, is found in lowland areas of the Northeast (such as Punxsutawney, PA) and the Midwest United States, but has also somehow burrowed its way into northern Washington state, Alaska, and British Columbia, Canada.

Also called the woodchuck (and, no, we don’t know how much wood a woodchuck would chuck if a woodchuck could chuck wood), the genus is more commonly called “groundhog,” so named because, like a pig, it roots in the earth. We don’t know why some call it “whistlepig,” however, because nowhere has it been recorded that these things can whistle. We do know that the name “woodchuck” is the English corruption of an Indian name for the animal.

The groundhog is a type of marmot, and what marmots are, essentially, are very large squirrels. Squirrels root in the earth to bury acorns for storage. This seldom bothers people because squirrels, having quite small paws, dig only tiny holes (Learn how to get rid of squirrels). Woodchucks, having large paws, dig big holes, not to bury acorns but to build tunnels to live in, and they will dig them in any relatively flat area, including your lawn. This makes them nuisances to those who prefer having lawns that are un-besmirched by groundhog burrows.

Groundhog Facts: Why they’re a Nuisance

By clearing out forests and killing off wolves and other natural predators, farmers and foresters have caused the groundhog to proliferate over the past century. Now that human habitation is spreading beyond cities and suburbs, homeowners face close encounters with these buck-toothed fur-balls. Whereas the not-so-little varmints (they can weigh up to 30 pounds) still fear their ancient predators, many of whom are no longer around, they aren’t all that afraid of humans. Therefore, hunters can get close enough to get an easy shot at Mr. Woodchuck.

Hunting, you would think, would keep groundhog populations in check. It doesn’t, any more than it keeps the deer population in check. These rodents reproduce faster than marksmen could possibly eliminate them, and hunting, as a sport, has declined in popularity over the past few decades. Besides, if you’re going to hunt something, why not hunt something you can eat?

Not that you can’t eat groundhog. Apparently it was pretty common to be served at rural dinner tables back in the 19th Century, and people in the Ozarks and Appalachia still eat squirrel, a cousin of the groundhog. But groundhogs hibernate in the winter; therefore, much of its body’s bulk is food stored away in the form of fat, making the creature rather greasy eating. Besides, they’re also cousins of the rat, and in western society, there is a taboo against eating rats.

Getting Rid of Groundhogs

So, unless you want to use them for target practice (which may be illegal where you live so, if you want to shoot them, best check with your local authorities), you’re going to need some method for getting rid of them that doesn’t require a gun.

There are as many old-time “folk remedies” for shooing them, as there are modern technologies:

The only certain way to rid yourself of groundhogs is to trap them. Leghold traps may be used, though with one of those, you will then have to kill the animal, and you need to check with local authorities on whether such traps are legal where you live. You may also use a non-lethal trap to catch the groundhog and then release the trapped animal in another location. Such traps may be purchased or, sometimes, borrowed from a humane organization.

Your best bet is to do this in the spring, when groundhog holes will be easier to find and groundhogs, coming out of their hibernation, will be hungrier for your bait. The place that provides your trap can give you advice on baiting it. Spring is also preferable because you will be ridding yourself of the groundhogs before they reproduce and give you more animals to get rid of.

If you don’t want to put up with the nuisance of doing it yourself, there are also plenty of pest control agencies you can hire who will get rid of the groundhogs for you. Find one that guarantees their work.

31 People reacted on this