How to Get Rid of Hives 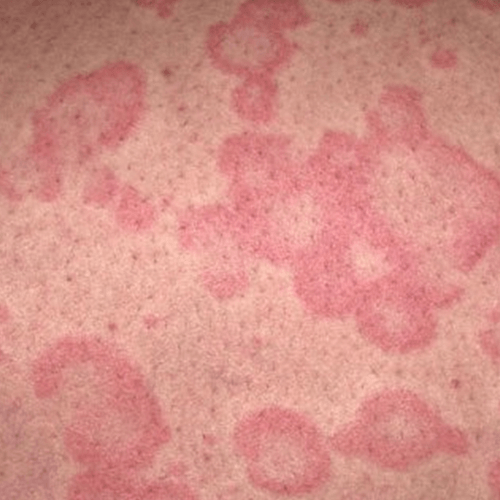 Urticaria (or hives) is a skin condition—commonly caused by an allergic reaction—that is characterized by raised red skin wheals (welts). It is also known as nettle rash or uredo. Hives can be round, or they can form rings or large patches that can occur anywhere on the body, such as the trunk, arms and legs. Wheals (welts), red lesions with a red “flare” at the borders, are another manifestation of hives. Wheals from urticaria can also appear anywhere on the body, including the face, lips, tongue, throat and ears. The wheals may vary in size from about 5 mm (0.2 inches) in diameter to the size of a dinner plate; they typically itch, sting or burn severely and often have a pale border.

One hallmark of hives is their tendency to change size rapidly and to move around, disappearing in one place and reappearing in others, often in a matter of hours. Individual hives usually last two to twenty-four hours. An outbreak that looks impressive, even alarming, first thing in the morning can be completely gone by noon, only to be back in full force later in the day. Very few, if any, other skin diseases occur and then resolve so rapidly.

Hives can be very difficult to treat. There are no guaranteed treatments or means of controlling attacks, and some sub-populations are treatment-resistant, with medications spontaneously losing their effectiveness. It can be difficult to determine appropriate medications since some, such as loratadine, require a day or two to build up to effective levels, and since the condition is intermittent and outbreaks typically clear up without any treatment.

Most treatment plans for urticaria involve being aware of one’s triggers, but this can be difficult since there are several different forms of urticaria and people often exhibit more than one type. Also, since symptoms are often idiopathic, there might not be any clear trigger. If one’s triggers can be identified, then outbreaks can often be managed by limiting one’s exposure to these situations.

The goal of treating most cases of ordinary urticaria is to relieve symptoms while the condition goes away by itself. The most commonly used oral treatments are antihistamines, which help oppose the effects of the histamine leaked by mast cells. The main side effect of antihistamines is drowsiness.

Drug treatment is typically in the form of antihistamines such as diphenhydramine, hydroxyzine, cetirizine and other H1 receptor antagonists. These are taken on a regular basis for a protective effect, lessening or halting attacks. While the disease is obviously physiological in origin, psychological treatments such as stress management can sometimes lessen severity and occurrence. Additionally, methods similar to psychological pain management can be used to shift focus away from the discomfort and itchiness during an attack.

For your information, this antihistamine list is in no way exhaustive; there are many more medications out there for hives patients to try out. Physicians individualize treatment plans to suit specific patients and modify them depending on the clinical response.

To know exactly what kind of hives you have, or to learn more about research into the immune basis of hives or about rarer forms of this condition, you should consult your physician. It is important, however, to keep in mind that most cases of this common disorder represent either ordinary urticaria or physical urticaria, which are annoying but not serious or allergic, and almost always temporary.

Hives are generally caused by direct contact with an allergenic substance or an immune response to food or some other allergen, but can also appear for other reasons, notably emotional stress. The rash can be triggered by quite innocent events, such as mere rubbing or exposure to cold.

Hives are also produced by histamine and other compounds released from cells called mast cells, which are a normal part of skin. Histamine causes fluid to leak from the local blood vessels, leading to swelling in the skin.

Hives are very common. Although they can be very annoying, they usually resolve on their own over a period of weeks and are rarely medically serious. Some hives are caused by allergies to such things as foods, medications and insect stings, but the large majority of cases are not allergic, and no specific cause for them is ever found.

Although patients may find it frustrating not to know what has caused their hives, maneuvers like changing diet, soap, detergent and makeup are usually not helpful in preventing hives and are for the most part unnecessary.

In rare cases (some hereditary, others caused by bee stings or drug allergy), urticaria and angioedema are accompanied by shock and difficulty of breathing. This is called anaphylaxis. Ordinary urticaria may be widespread and disturbing to look at, but the vast majority of cases do not lead to life-threatening complications.

Other forms of physical hives are much less common. Triggers for these include cold, water and sunlight. As such, physical urticarias are often categorized into the following:

Click here for more information on how to get rid of hives.

16 People reacted on this