How to Get Rid of Homophobia

Posted on: March 11, 2009 Posted by: Nicole Harding Comments: 0
Tags: How to Get Rid of Homophobia 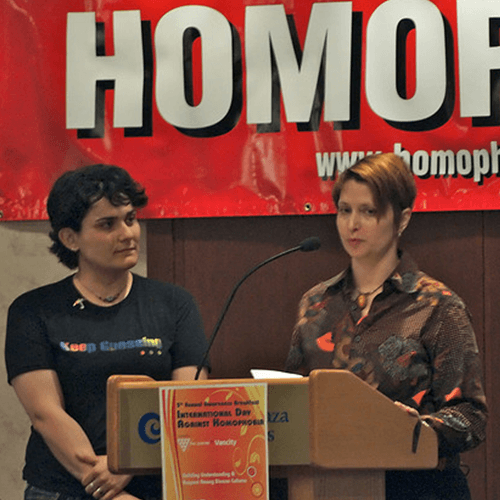 Fear often drives hatred. We fear what we do not understand. Homophobia is a very real problem, driven by those who fear and misunderstand the LGTBQ (Lesbian-Gay-Trans-Bisexual-Queer) community. Although homophobic hate crimes, abuse, and discrimination are still common and widespread, North American society has come a long way in the acceptance of the LGTBQ community. If you find yourself unable to shake your homophobia, or know someone who has this problem, here are some ways to get rid of your prejudices.

Understanding homophobia is the first step in getting rid of it.

The terms are often confused, but prejudice and discrimination are actually two different things. Prejudice means what it sounds like, to pre-judge. This means that when you have homophobic thoughts, you are actually pre-judging an entire group of people. Most of the time prejudiced thoughts come from misinformation, limited exposure, and outside influence (i.e. the views of a role model).

Discrimination, on the other hand, is acting on these judgements. For example, if an employer decides not to hire a prospective employee because he or she is gay, they are discriminating. When taken a step further, homophobia can lead to individuals committing verbal, physical or sexual abuse towards the LGTBQ community.

Why are people Homophobic?

There are different types of homophobia, ranging from name-calling to aggressive physical violence, and all of it unacceptable.

People develop homophobic thoughts and feelings through influence. Generally, people firm their core values, beliefs, and identity during the early years of their lives. Therefore, parents or role models are a major influence over their children’s behavior later in life. Often they pass on religious beliefs, including discriminatory teachings, towards the LGTBQ community. For the most part, these teachings ignore or contradict other aspects of the religion to promote such hatred, painting a poor picture of other, non-prejudiced believers.

While the ideology is mostly rooted in religion, physical violence stems from fear, anger, and aggression. Psychologists have pointed out that this violence towards both men and women comes from a desire to “prove” masculinity. Assault, rape and even murder point to underlying insecurities, with the target chosen due to misinformation.

How do you get rid of it?

Dealing with your own feelings of homophobia can be difficult; trying to persuade others to release their prejudice can be almost impossible. However, there is hope! For those with homophobic thoughts and feelings, take it step by step:

How did it begin? Was there a leading role model or influence in your life that shaped your thoughts? Think back on that person. While you might have fond memories of them, they probably had identifiable flaws that allowed them to speak hatred towards others.

If religious teachings were the problem, go back to the scripture. Almost every religion discusses the “golden rule,” to treat others as you would wish to be treated. Realign your faith with the true teachings.

Jumping into things can be awkward and difficult. The LGTBQ community has been discriminated against for a very long time. Getting involved in a conversation that might be inadvertently offensively is not a good idea. Discover the correct terminology, and conduct some actual objective sources. If you want to eliminate your prejudices, you need the correct information.

Find someone with ties or experience with the LGTBQ community and ask them questions, even ones you think might be offensive. Instead of diving into a conversation with a person who has lived through intense discrimination, talk to an outsider with experience. They are more likely to give you honest feedback without being personally hurt by your questions.

Did you know that not all gay, lesbian, trans, bisexual, and queer people are the same? In fact, the LGTBQ acronym is constantly changing to reflect additional genders and sexual orientations that people identify with. The community is therefore incredibly diverse, and not solely what you see in TV shows.

Getting yourself involved in the various sub-cultures can be difficult, and that’s okay. Going to a club full of leather daddies is not for everyone. But finding a LGTBQ culture to explore is important. The more you get to know the community, the more you will understand that they are simply other people, trying to live their lives. Hating someone you know is far more difficult than hating an abstract idea.

Try going to your local gay pride parade. If you don’t have one, travel to a place that does. The joy and happiness expressed by people who can finally reveal their true identity spreads quickly.

If you simply cannot get these thoughts out of your head, see a therapist. There are numerous treatment options for prejudiced thoughts and feelings. Even just talking through them with someone you don’t actually know can be highly beneficial.

On the other hand, defeating homophobia in others can be very tricky. Try out some of these ideas:

Most homophobes are followers. They want to fit in and will go along with prejudiced ideas or discriminatory actions for the sake of recognition. Trying to convince an entire group of their misguided beliefs is nearly impossible. Find individuals who you believe are simply going along. Sit down with them in a one-on-one basis, and explain your position. This is the only way to change hearts and minds.

7. Focus on the Suffering.

Calling a homophobe a homophobe is unlikely to help. People do not react well to negative criticism. Instead, show them examples of LGTBQ suffering at the hands of homophobes. Even if they simply have prejudiced thoughts, explain how these thoughts can continue discrimination. Even if you don’t agree with the actions, agreeing with the thought process behind those actions can lead to self-satisfaction.

Again, this can get awkward. But if a homophobic person has difficulty changing core values that have been accepted for a long time, show them the other side. When humanized, it becomes easier to understand that gender and sexual orientation is not something one chooses.

The LGTBQ community has gone through rough patches internally. Allies have been sparse, and widespread acceptance has still yet to be attained. Working together is the only way to get rid of homophobia more broadly. Whether through events, marches, protests or fundraisers, getting the message out with one loud voice can help win over the misguided.

Although systematic discrimination still exists in many parts of North America, change is coming quickly. Much like the African American Civil Rights Movement in the 1950s, 60s and 70s, the LGTBQ community is also pushing to have their rights recognized.

Rights are only the beginning. As we have seen with the African American movement, discrimination can still exist without legal barriers. Ridding the world of homophobia will require hard work and dedication.

See also: How to Get Rid of Needle Phobia