How to Get Rid of Japanese Beetles

Posted on: November 25, 2008 Posted by: Nicole Harding Comments: 0
Tags: How to Get Rid of Japanese Beetles 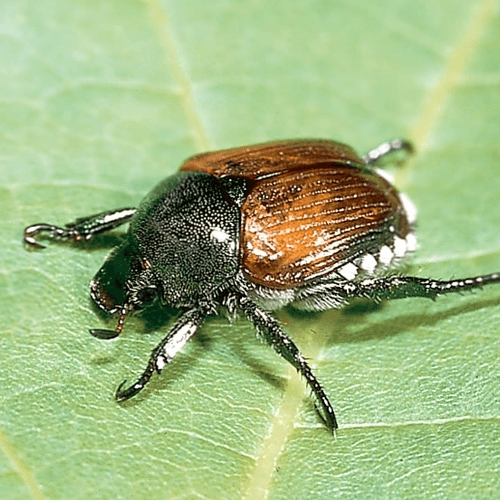 The Japanese beetle, also known as the jitterbug, is a beetle with a shiny copper-colored elytra and a green top for its thorax and head.

In Japan, this type of beetle is not destructive because its population is controlled by natural enemies; however, in the United States and other Western countries, it is a serious pest that destroys grapes, rose bushes, crape myrtles, canna, and other plants.

Japanese beetles damage plants by eating the surface but leaving the veins in place. This results on an alarming conclusion known to experts as the “transparent leaf” effect. Once this insect congregates, a swarm can destroy landscapes in days. Japanese beetles are voracious species of pestiferous insects.

Japanese beetles even in large congregations are not impossible to eliminate. Primarily because of their destructiveness, experts have developed strategies for controlling them. The following recommendations are conventional but proven techniques for controlling and eliminating Japanese Beetles:

There are several ways to adapt your yard so that you can get rid of Japanese beetles without resorting to chemical usage.

The effectiveness of Japanese beetle traps has been under scrutiny since their introduction on the market. The problem most people have regarding the devices is the tendency to attract more beetles than to actually trap.

Placement of beetle traps is an important matter, especially when dealing with plantations. As much as possible, try to keep the trapping devices downwind and far away from the plants to minimize risk and avoid accidents.

Japanese beetle traps are often considered best for community-wide control programs. Normally, traps are set about 200-300 feet apart around the perimeter to be protected. Try asking local experts and authorities regarding this matter to further understand the requirements involved.

Japanese beetles, both adults and grubs, are pests that can ruin plants and whole garden landscapes. It is important for those who encounter such insects to act quickly and efficiently. Try researching about Japanese beetles to further understand their habitat and behavior. A house without pests is a dwelling worth living in!