How to Get Rid of Ladybugs 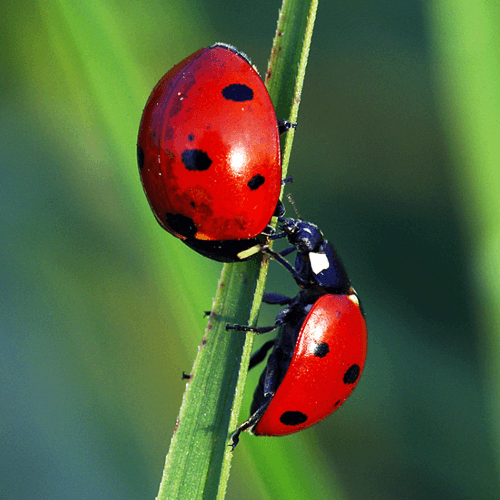 Children love it when a lady bug lands on them, for then they can recite the age-old rhyme, “Lady bug, lady bug, fly away home…” Serious gardeners also love lady bugs, purchasing them and setting them free to eat other bugs in their garden and hoping that they stick around instead of “flying away home.” A single ladybug is capable of consuming 50 to 60 aphids per day and eats a variety of other insects and larvae.

Getting Rid of Ladybugs

That said, a lady bug problem has developed in America. Companies who raise and sell lady bugs to gardeners and farmers began some years back importing them from Asia. The foreigners are supposedly more voracious than our domestic variety. Our lady bugs die off in the winter; foreign lady bugs hibernate, problematically in people’s houses. They would prefer rocks and caves, but they don’t always have them available.

These lady bugs seek out structures with an abundance of cracks and crevices which they can use to gain entrance. Homes with cedar shakes or other wood siding, older houses, and houses painted a light color seem to be more vulnerable. The pheromones they excrete while in your home attract more bugs that mass over a period of years and become unbearable when they start overflowing from the crevices and the attic into living spaces. Although they do not destroy anything in the home or pose economic problems, get enough of them and they will be buzzing around your lamps, landing on you, and beginning to bite; food is scarce for these bugs during the winter months, so they are known to randomly bite things in an effort to find sustenance.

The first step in controlling them is to deny them access to your home. One year, you may witness a flock of bugs emerging from your house’s crevices in the spring. If you don’t do anything about them, they will increase over the following years. Inspect for areas where they may have gotten in or are living. During your inspection, don’t neglect the attic or crawl spaces. Ladybugs like to burrow under and between insulation and wood sheathing.

Liquid chemical treatments don’t do well in the attic. If you are going the insecticide route, instead, use deltamethrin dust.

Seal any and all cracks and crevices. The areas around windows, molding, and light fixtures are also commonly used routes of entry that should be reduced or eliminated by injecting them with foam insulation. Some foam comes with a built-in insecticide.

Using insecticidal soap spray avoids potentially harmful chemicals and will kill them on contact, but has no residual effect and is therefore not an effective repellant.

A chemical called cypermethrin, found in a number of products sold by building supply stores and nurseries, kills lady bugs on contact and drives them away from the house. It is sprayed on outside walls after filling in cracks, and its effect lasts several weeks. It needs to be sprayed at least three times a year until the problem disappears.

After having sprayed outside, you may find a few have found their way into your living area. If you prefer not to terminate them with extreme prejudice and you set them free, make sure it’s at a distance from your home. There are also bug glue pads laced with pheromones that attract the bugs that then get stuck to the glue. This does seem a bit cruel, however. A lighted lady bug trap also uses the pheromone lure along with a UV lamp that lady bugs are also attracted to. The trap can hold hundreds of lady bugs, and it can be used inside or outside.

If you prefer immediate and lethal results for the bugs flying about, you can play Obi Wan Kenobi, using a hand-held zapper instead of a light sabre. You just hold this thing in a bug’s path (you can also use it on houseflies, wasps, and mosquitoes) and when contact is made, the bug gets a lethal dose of electricity. A bug zapper/vacuum will suck bugs out of the air, and you can decide whether to release it or whack it. You become judge, jury, and bug zapper.

Cheaper than a zapper is an industrial vacuum cleaner. Put a thin cloth in the bottom, suck the bugs out of the air, take out the cloth with the bugs, and then decide their fate.