How to Get Rid of Mice 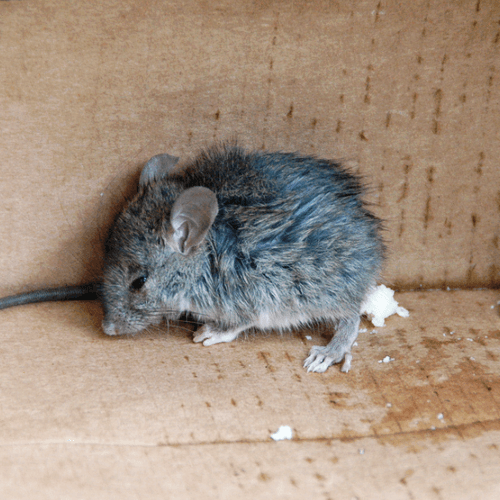 Getting mice out of your house can be a challenging and difficult task if it is not handled properly. They are known to build homes in between your walls or small crevices in the yard. The little guys are lightning quick and just about impossible to catch by hand, so what are the best ways to get rid of something you can’t catch? We offer advice on some of the best ways to keep mice out of your house, and get rid of the mice that are left behind.

First you need to identify where these mice are living. You can usually tell by the strong scent that comes from their homes and the feces outside the hole. Once you’ve identified where they live, you can work on keeping them out.

Plugging up the holes that the mice travel through will keep them out of the living area, but if you trap them in there it’s only going to cause more problems. Start by sealing the holes visible from your living area; if they get trapped in your walls they are only going to dig or chew another way out.

It’s not guaranteed they will leave after the holes are sealed, so check back regularly to see if any new holes have emerged around your home.

Since they’re so small, mice will eat any little scrap or pebble of food they can find left around the house. Keeping food sealed and your house clean can go a long way for deterring mice from living there. If they can’t find anything to eat, they’re more likely to move on to another place.

You will also want to keep any garbage far away from your home. Rodents smell trash from a mile away, so it would be better to have them digging around your garbage on the curb rather than in your garage.

3. Use an ultrasonic device.

Like a dog whistle, there are anti-mice sound devices you can buy that send out a very high frequency that humans can’t hear. If you can imagine living life having to hear a kettle boil close to your ear, that’s pretty close to what the mice would be going through. This doesn’t always solve the problem, but it’s definitely more annoying to them than not having one.

If mice have invaded your home and you can’t stop them from entering, there are several traps you can lay around your house to get rid of them in humane, and less humane ways.

There are many humane box-traps you can buy that will lure the mouse in with bait and trap them there. After they’ve been caught, take them outside and away from your home to release them. Preferably, you want to do this in an unpopulated area so you don’t give the problem to your neighbors, and the mice will have somewhere to live that isn’t another house.

Mice hate water. Set up a bucket with water and place some food on a collapsible bridge on top of it. Once they have gone for the food, they will fall into the water. However, you need to be on top of your game if you don’t want a dead mouse floating around in the trap. Check back regularly to see if you’ve caught anything, and release them quickly if you have.

For this, all you need is a cup, a coin, and some bait. Place a cup upside down on a flat surface and have some bait stick to the upper area of the glass’ inside portion. Lift up the cup a little and have the coin sit on its edge to hold up the cup. When the mouse goes for the bait inside, it will knock off the balance of the coin and be left with nowhere to go. After you’ve caught it, release the mouse outside.

If nothing else is working, you may have to exterminate the poor little fellas. With these traps you have to be very careful if you have any other pets in the house, as they might go for the bait just as easily as the mice do.

These spring loaded traps are the quickest and most humane ways of killing mice if it has to be done. Place some bait on the sensitive part of the trap, and as they put weight on it the trap will spring into action. Try spreading these around your house, as mice are likely to learn if they see some casualties in similar traps close by.

Rat poisons can be spread onto bait around the house, and will eventually cause the rat to die by internal bleeding. The anticoagulants in the poison work slowly in the rat so that the others do not pick up on the fact that they’re dying from eating the food. Make sure your other pets aren’t getting into the bait, as there are likely to be similar effects on them.

Ah, the classic game of cat and mouse. Unlike in Tom & Jerry, cats actually do a pretty good job of catching mice. If you have a cat, that’s great; set it loose. If not, you might want to consider getting one if the mouse problem is bad enough. They will catch mice both outdoors and indoors, so don’t be shy about letting them wander around your yard either.

One thing to keep in mind is that in addition to being a more humane solution, not killing the mice is actually better at keeping them away. If you decide to kill the mice in your home, the ones who are left over will have more food for themselves and are more likely to breed. Sealing your home and releasing them far away is a more humane and effective way to do things.

Unfortunately for animal lovers, the invasive mice do not make for very good adoptable pets. Learn to keep them away instead, and check out your local pet store to get one that would rather run around in a wheel all day.

586 People reacted on this