How to Get Rid of Pimples 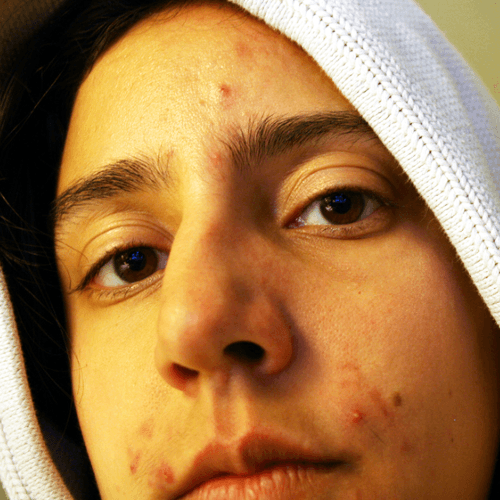 A pimple or zit is the annoying facial outgrowth that seems to know the best timing to reveal itself. Getting rid of pimples is not only an adolescent battle but also can lead into adulthood.  It suddenly appears on your face when you have to look your best. It’s a teenager’s worst nightmare and can even cause depression, anti-social behavior, bullying and loss of self-esteem (Learn how to build self esteem).

Many people wonder the difference between a pimple and acne, but there is really no difference. Acne is the medical term for pimple. However, many people associate acne as more intense than a pimple when it’s really just the same thing.

A pimple is a skin condition that results in obstructed or inflamed pores. Your skin has many sebaceous oil glands under it. These glands are connected to a follicle. They release oil so that it can force dead skin cells (from the dermis) out of the skin. However, the irony of life is that the follicles have a thin strand of hair that grows through and blocks most of the space where the dead skin cell must come out. The end result is clogging and the visual representation of that is a stubborn pimple.

Many people have controllable pimples, which means that their pimples only appear as whiteheads or blackheads. However, there are some people out there that have hyper-active sebaceous glands that secrete oil too much. This creates a perfect environment for a bacterium which dermatologists call “Propionibacterium.” This is generally harmless bacteria, but when it finds the right face to settle upon, it inflames the skin of the victim.

The bacteria get too comfortable with their new-found home, causing some more spots and redness on the victim’s face. The worst-case scenario is when cysts start to develop under the skin’s surface and infection is disseminated to the surrounding tissues. This is what most people refer to as acne.

This article will explore solutions to the occasional pimple – one that’s not that bad and can be controlled without resorting to any medication. The occasional pimple doesn’t require a trip to a dermatologist. You only have to follow some of the steps right here to stop the bacteria from making your face their party place.

Prematurely popping a pimple causes a mild skin infection. It can also cause a cyst by forcing the infection further down into the follicle shaft. What’s worse, it can also cause a permanent scar, which is a major beauty no-no. To know when you’re pimple is right for pricking, wait until you can see yellow pus that’s about to break out form the skin. This is the signal that your pimple is okay for you to prick and that it won’t be too painful to do so. Have you tried pricking a premature pimple? It definitely can hurt.

Perform Your Own Surgery

Popping a pimple with your bare fingers might not be a good idea. If you have sensitive skin, this may further aggravate the infection that’s already caused the pimple in the first place. Instead, get a bottle of alcohol, gauze (band-aid is fine), a sewing needle (not the large one!) and warm water. Sterilize the needle entirely (not just the tip). There’s no need for some lit candle to run the needle through it, you’re not a quack doctor!

Any surgery requires thorough washing of your hands. Though popping a pimple is nowhere near minor surgery, you have to make sure you won’t introduce new germs to your ripe pimple because there’s a tendency you might touch the pimple and the goo while popping. For a safer measure, sterilize you hands with alcohol before you proceed to popping. Wash both your face and hands before you start.

You don’t need to prick your pimple with the needle with any degree of depth. Just prick it very lightly. You may use the gauze to cover your fingers by placing two small squares near both sides of the pimple. Using two fingers, apply ample pressure that’s enough to squeeze out the pus from the pore. Resume doing this until only a clear liquid comes out from the pricked pimple. When blood appears, that’s your signal that the all pus is removed and it’s time to stop.

Once you’re done popping your pimple, soak the gauze pad with alcohol and wipe the area with it. This should sting, but it’s necessary so that the alcohol can kill the bacteria around the wound. This will prevent the freshly-pricked pimple from developing another infection on the actual wound. Protect the wound from other bacteria that may arrive by covering it with gauze or a band-aid. This is the reason why it’s best to pop your pimple when you have nothing else to do but stay at home.

If you pop your pimple shortly before you attend an important event or gathering, this is when concealer comes in handy. Make sure you use an anti-bacterial concealer.

There are over-the-counter products that can dry up your pimples quickly. However, these products won’t exactly remove the pimple instantly. Instead, they speed up the ripening of pimples. There are products such as “Pan-Oxyl,” a topical ointment that you can use to treat pimples. It contains benzoyl peroxide, a chemical that pimple-causing bacteria hate. The effectiveness of ointments varies according to how your skin responds to the chemicals. There are cases when topical pimple solutions don’t work at all. You just have to invest some time in finding the right pimple ointment for you.

There is a pimple removal device called “Zeno,” which is one of those “As Seen On TV” products that roughly costs $200 on the market. The device comes with a metal tip that can produce intense heat, which you can apply to the pimple. The product claims that this heat can kill the pimple-causing bacteria, allowing your skin to naturally heal itself. It may sound too costly for popping a pimple, but hey, all products have some market out there.

You can also use some astringents that contain tea tree oil. Tea tree oil is a natural germicidal and antibacterial agent known to relieve and treat occasional pimples and even severe acne. You can outsmart your pimple from spreading by using this product in the event of a pimple outgrowth.

Not just on Your Face

Since your whole body is covered with skin, you can grow pimples anywhere, not just the face. Among the most popular pimple locations are the back, chest, underarm, arms, buttocks and even the man’s penis.

You might find this hard to believe, but there might be pimples that grow on the penis. It’s very uncommon for acne to grow on the genitalia, but it does happen to some guys. If this happens to you, you might want to get tested for herpes because pimples on the genital areas are one of the symptoms of an STD. If you know yourself very well and don’t think that this pimple is the result of a venereal disease, it might just be an allergic reaction, wound reaction, or a sanitation malpractice. If that’s the case, arrange an appointment with your trusted physician or dermatologist. If you enjoyed reading this article, you might as well enjoy reading how to conceal a pimple.

22 People reacted on this