How to Get Rid of Razor Bumps

Posted on: August 17, 2008 Posted by: Nicole Harding Comments: 6
Tags: How to Get Rid of Razor Bumps 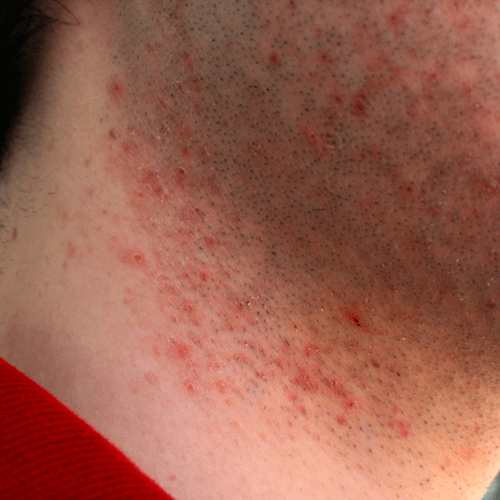 Remember that final scene from “Da Vinci Code” when Tom Hanks shaved and blood dripped on his sink? In the real world, blood that drips from careless shaving won’t be your treasure map to uncovering the world’s greatest find. Instead, it’s a sign that you’ll spend the day with pseudofolliculitis barbae, more commonly known as razor bumps.

Razor bumps are bothersome especially for people who like to maintain soft, smooth skin. There are instances when razor bumps are mistaken for bad acne (Tips on how to prevent acne) because it looks like red, bumpy patches. It’s a known fact that people with curly or kinky hair are more prone to razor bumps. This is due to the way razor bumps form from a freshly shaven hair that was cut at an angle by the blade. This means the hair fragment is sharp and pricks the skin once it grows back and curls.

The skin reacts to the irritation of the sharp stubble that’s growing back. The skin reacts to this irritation just like any infection it incurs by swelling up. This, in turn, causes the visible redness called razor bumps or razor burn. It’s actually a natural shaving phenomenon. It’s part of life. However, it may become what others call a “barber’s rash,” which is bigger but definitely not better. This happens when staph bacteria penetrates the razor bump. You must be surprised that these innocent looking razor bumps can turn into monsters. Before any other mutations take place, it’s best to get rid of them as early as possible. Know the drill for how you can prevent the onset of razor bumps every time you shave. (Learn how to prevent razor burn )

Listen to your skin. Your skin can actually give you clues on how often should you shave. If you’re the type of person who constantly gets razor bumps every time you shave, it’s best that you shave at intervals. Give your skin at least three days rest after ever shave and throw those blades away. It’s best if you use electric razors or beard trimmers. These devices have two benefits: first, it assures you that your facial hair won’t be out of control; second, it doesn’t put a lot of pressure on your skin, compared with traditional razors, so you won’t have bumps at the end of the day.

Don’t just get your razor and shave away. You must get into the habit of softening your hair first before you flick those blades over your skin. Warm water softens the hair, making it possible for your razor to create a more even shave. There are many ways to execute this softening method. You can take a shower before you shave away or soak a wash cloth in warm water and put it across the area that you’re going to shave. Let it stand for at least 5 minutes then start doing your ritual. The washcloth method feels great, which is why many people use this technique. Also, many people prefer to shave first before they shower. It’s easier to stop any bleeding from shaving before the shower rather than after.

Be Gentle on Your Face

The reaction to razor bumps that many men have is the same as the reaction to any pimple or blemish on the face. There is much desire to remove the spots, so they tend to touch them, pick them or squeeze them in a subconscious effort to get rid of them. Never do this because it only makes matters worse. One of the ways to get rid of razor bumps is to stop rubbing your face. The fact that there are razor bumps is already an indication that your skin is quite sensitive. Instead of aggravating the irritation by touching it with your bare hands, it’s best that you use an antiseptic. There are anti-microbial treatments that are available over-the-counter to specially prevent razor bumps or other skin infections. These treatments also help numb the affected areas and clean the irritation or wound. Buy one of these so that if you happen to incur some cuts, nicks or scrapes from shaving, any infection can be stopped at once. There are also aftershave lotions that contain tea tree oil, alcohol or iodine which also prevent razor bumps from any infection.

Here are some tips for selecting razor bump treatment products:

There are instances when razor bumps show up along women’s bikini areas. This is a major no-no for women, particularly those who shaved to strut some stuff at the beach.

Here are a few tips on how you can prevent having razor bumps while you shave the bikini area.

The best trick of the trade is to always keep the infected area free of germs. If you’re the type who always deals with razor bumps, it’s best to trade your beauty soap for germicidal soaps. The same rules for any other irritation apply: the sooner you start, the quicker they disappear. Never ignore your razor bump and simply continue shaving. Remember, when you’re dealing with infected hair shafts that are often disturbed by blades, more permanent acne may take their place.

If you’re having issues with razor bumps, you may also be interested in learning how to shave.