How to Get Rid of Scoliosis

Posted on: April 1, 2009 Posted by: Nicole Harding Comments: 2
Tags: How to Get Rid of Scoliosis 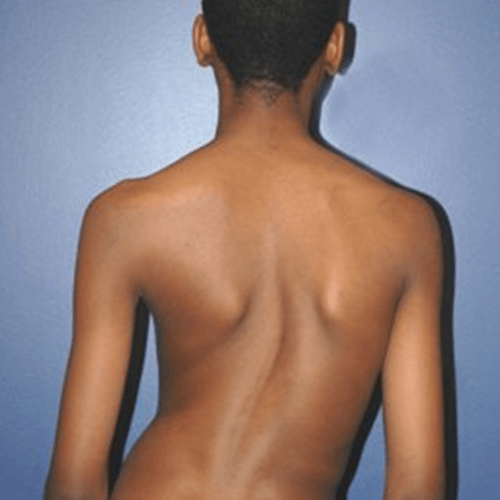 Scoliosis is a medical condition in which a person’s spine is curved from side to side, and may also be rotated. On an x-ray, the spine of an individual with a typical scoliosis condition may look more like an “S” or a “C” than a straight line. It’s typically classified as congenital (caused by vertebral anomalies present at birth), idiopathic (sub-classified as infantile, juvenile, adolescent or adult according to when onset occurred) or as having developed as a secondary symptom of another condition, such as cerebral palsy or spinal muscular atrophy.

In the case of the most common form of scoliosis, adolescent idiopathic scoliosis, there’s a clear Mendelian inheritance but with incomplete penetration. Various causes have been implicated, but none has consensus among scientists as the cause of scoliosis. Scoliosis is more often diagnosed in females and is often seen in patients with cerebral palsy or spina bifida, although this form of scoliosis is different from that seen in children without these conditions. In some cases, scoliosis exists at birth due to a congenital vertebral anomaly. Scoliosis often presents itself, or worsens, during the adolescence growth spurt.

The treatment options depend on the severity and the age of the person. Doctors can, of course, make up a long list of treatments; only a few have actually been shown to affect the outcome of scoliosis. Numerous studies have failed to show any benefit from exercise, manipulation, meditation or drugs. While exercise is beneficial to maintaining good muscle tone and a healthier heart and lungs, there’s no evidence that it affects, one way or the other, the curve progression. Still, it may help in reducing discomfort. In any case, a patient has the following options for treatment:

On the other hand, if the person has reached maturity ( physical at least) then if the curve is mild, below forty degrees, it may not increase any more. So not doing anything may be okay in that situation.

Surgery for scoliosis is usually done by an orthopaedic surgeon who specializes in spine surgery. For various reasons, it’s usually impossible to completely straighten a scoliotic spine, but in most cases, very good corrections are achieved. In the adult age range, the reasons for doing surgery are less well-defined but include decreasing discomfort or pain in a curve that appears to have increased.

Surgery, however, is a big deal and not to be undertaken lightly. Doctors invariably use metal rods and screws to help straighten and hold the spine in the corrected position. There are three major types of curves, each with their own method of correction. However, the particular corrective surgery may vary depending on your doctor’s judgment. Surgeons base their procedures on many different factors, including their experience with techniques and their outcomes.

Pain is common in adulthood, especially if the scoliosis is left untreated. One of the major complaints from patients and their parents is cosmetic deformity. Pain can occur because the muscles try to conform to the way the spine is curving. However, this usually only happens in larger curves. As the curve keeps growing, there’s more pressure in some prominent areas than in others. This can cause the muscles to seize up and become sore.

The symptoms of scoliosis can include:

Scoliosis is a three dimensional problem. It’s easy to think of the curves from looking at the back or the front; but the side view also must be considered. Flattening of the normal roundness to the side view of the back affects the general look of the back and the person.

One of the aims of surgery is to try to restore the normal contour of the back from both the front view and the side view. Of course, at times, learning to cope, accept and live with this scoliosis is a treatment that’s far more effective than major surgery or wearing a brace, though trying the latter methods won’t hurt either.

Click here for more information on how to get rid of scoliosis.