How to Get Rid of Side Cramps 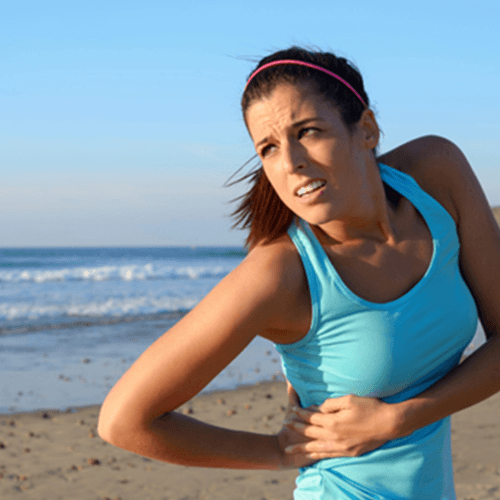 A side cramp, also known as a side sticker, a side stitch, or simply a stitch, is an intense stabbing pain just below the ribcage. It is usually felt when running. It’s also sometimes referred to as exercise related transient abdominal pain or ETAP. The main cause of stitch is still unknown, but recent studies have suggested that it’s probably caused by strain on ligaments connecting your liver to the diaphragm. Running or exercise exert a steady downward force on your liver, stretching these ligaments and causing pain. While the pain usually disappears quickly, it can be annoying and interfere with your workout. The following are tips to get rid of stitch and how to prevent them.

Getting Rid of Stitch while Running or Working Out

Since stitch is related to strenuous exercise, the best cure is probably to slow down or stop until the pain is gone. Some people though don’t want the stitch to ruin their momentum, so they keep going even with the stitch. There’s currently no evidence that suggests this is unsafe, so if you want to keep on running or working out despite the stitch, the following tips should help you get rid of the pain quickly.

Step 1: Slow down or reduce your pace once you feel the pain in your lower ribcage.

Step 2: Put your hand on the area where you feel the pain, thumb to the rear and fingers to the front.

Step 3: Squeeze firmly with your hand, then bend at the waist at 45 to 90 degrees while still running.

Step 4: Run a distance of about 15 meters with your body bent at the waist, and then slowly straighten up.

One theory on the cause of stitch says that the rhythm of your breathing and running affects the strain on the ligaments that connect the diaphragm to the liver. You usually exhale as your left foot hits the ground when you’re running. This supposedly causes your liver to fall with gravity as your diaphragm rises, stretching the ligaments. According to many runners, the following breathing technique helps reduce or eliminate stitch while running.

Step 1: Try to synchronize your breathing pattern with your running.

Step 2: Determine which side of your body aches, the left or the right. Exhale when your foot on the side that doesn’t ache hits the ground. For example, if you have a stitch in your right side, exhale when your left food touches the ground. Don’t worry about inhalation because if you exhale at the right time, your inhalation should be synchronized too.

Step 3: Keep this breathing pattern until the stitch subsides or disappears. According to the theory, your diaphragm should move downward at the same time as your intestines, reducing the stress on the ligaments.

Other Tips to Get Rid of Stitch

The exact cause of stitch is still unknown, so people have different ways of dealing with it based on their theories. There’s currently no info on which way works best, but you can try the following if the techniques mentioned above don’t work.

How to Prevent Side Cramps

Preventing stitch is much easier to do than getting rid of it. If you prepare for your workout the right way, your chances of getting a stitch or any other kind of pain or injury should be reduced. The following tips should minimize your risk of getting a stitch while working out.

Don’t be stuck on your stitch. Do the right preparations before exercising, and always be mindful of your body’s condition to prevent side cramps and other physical injuries.

Click here to learn more about how to get rid of side cramps.