How to Get Rid of Spiderwort

Posted on: September 17, 2008 Posted by: Nicole Harding Comments: 0
Tags: How to Get Rid of Spiderwort 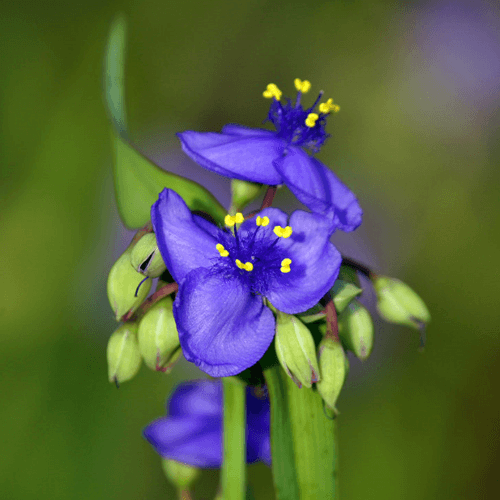 Believe it or not, a spiderwort, with its delicate-looking blue flowers, thin leaves and stems, is actually a hardy and robust plant. Many garden owners are surprised at how quickly this plant establishes and takes over a land area over a short period of time.

Spiderwort (Tradescantia) is also known as widow’s tears, wandering jew and inch plant. It is a weakly upright to scrambling plant that can be found in clumps or growing individually in wooded areas or fields. Its flowers generally sport six yellow anthers and three petals. It is commonly blue in color but it can also be white, pink and purple.

Spiderworts like warm, evenly moist soil. They propagate by seeds or by cutting and do not require much care, although they enjoy being in the shade and wilt under intense heat.

Spiderworts grow fairly easily and if left unchecked, can become an invasive plant that may defeat other plants in your garden. Some people even account spiderworts as a weed because of their aggressive rate of growth. They may become highly undesirable in your garden because spiderworts may outnumber and prevent other plants or flowers from germinating.

What’s the best way to get rid of spiderwort?

Don’t mow it. Since spiderwort also propagates from cuttings, it is highly inadvisable to mow it, especially when it’s healthy and in full bloom. It will just encourage new spiderworts to grow and you may end up with a thicker growth in your garden.

Dig and weed them up manually. It may sound like tedious work, but manually digging up spiderworts may be your best chance of getting rid of them. Fortunately, they come off the ground fairly easily when the soil is damp. The stems are described to be “spaghetti-like” so you won’t have to worry about them being too hard to grasp, although you can also your trusty garden spade to help you out in that area.

It will be easier to weed spiderworts when they have just begun to sprout. It’s also advisable that you start your digging and weeding when the spiderworts have just faded. Leaving them unchecked will allow the dead flowers to drop their seeds into the ground, ensuring a next batch of more spiderworts.

Mulching. If your spiderworts have claimed only a small patch of your garden, but you want to get rid of them before they propagate, you can also try mulching after weeding. After weeding out the patch of spiderworts, you can assume that some of their seeds have fallen into the ground. To ensure that they do not grow into a new batch, cover them with a layer of non-living material such as hay, straw, grass clippings, plastic film, garbage bags or newspapers to prevent them from receiving sunlight, which they need to grow.

Raking. You can use a rake to clear out spiderworts. Be careful in doing so and make sure that all plant fragments are gathered together in one pile, since leaving anything behind will cause more to grow. Put all the fragments in a sack and have it burned properly.

Roll out. Typically used for weeds or for tilling the soil, garden rolling tillers are available in your nearest hardware or gardening store. Be sure that the roots have been fully pulled out. Sweep the spiderwort’s plant fragments and burn them afterwards.

Hot water. Applying boiling-hot water to the roots of spiderworts is especially useful when they are growing in cracks or any hard-to-reach areas where you cannot manually weed them out.

Herbicides. One herbicide that is useful for invasive spiderworts is glyphosate herbicide, which is made up of glyphosate salts. These salts starve out the plants by being absorbed through its leaves, and then move on to its root system, where it blocks the production of proteins. Note that this herbicide kills any non-woody plant, so be careful! It’s best to apply this herbicide on a non-windy day to prevent it from getting to other plants.

You can opt to use a small paintbrush instead of a spraying device to apply glyphosate herbicide to spiderworts. This will prevent it from getting to other plants, although this particular herbicide is biodegradable, water-soluble and not toxic to other things in the environment.

Scientists are also currently testing methyl bromide herbicides against a tropical spiderwort, a particularly noxious kind of spiderwort that’s noted to be very aggressive in its propagation.

Burning. If you want to get rid of spiderworts on a larger scale, like in an open field, you can simply try burning it. This is a pretty extreme method of getting rid of spiderworts, so make sure to contact a burn crew to handle this one properly and to ensure that the fire is controlled and will do no unnecessary harm.

Propane weeder. A propane weeder is typically used for weeds but it may be used to get rid of spiderworts, as well. It can be found in most hardware stores and requires fuel; however, most amateur gardeners are not advised to use this device as it is tricky to control fire and may cause unwanted damage to other plants, your property or even to other people. If you insist on using one, use the propane weeders before the spiderworts develop extensive roots.

Beetles. In New Zealand, there is an exisiting proposal that indictaes the desire to import a leaf-eating beetle from the uplands of South Brazil called the Lema Obscura/Neoloma oglobini. This is considered a possible way to get rid of a particular kind of spiderwort called the Tradescantia fluminesis, or wandering willie.

Think before you buy. The best cure is prevention, even in gardening. There have been many reports of people buying spiderwort seeds before realizing how invasive they can be; however, there are many kinds of spiderworts out there and the option to get rid of them or not varies on a case-to-case basis.

Remember that there are many variations of spiderworts. Make sure that you know exactly what you are dealing with and follow all safety instructions before carrying out any of the tips mentioned above.

Click here for more information on how to get rid of spiderwort.