How to Get Rid of Thistle

Posted on: September 28, 2008 Posted by: Nicole Harding Comments: 0
Tags: How to Get Rid of Thistle 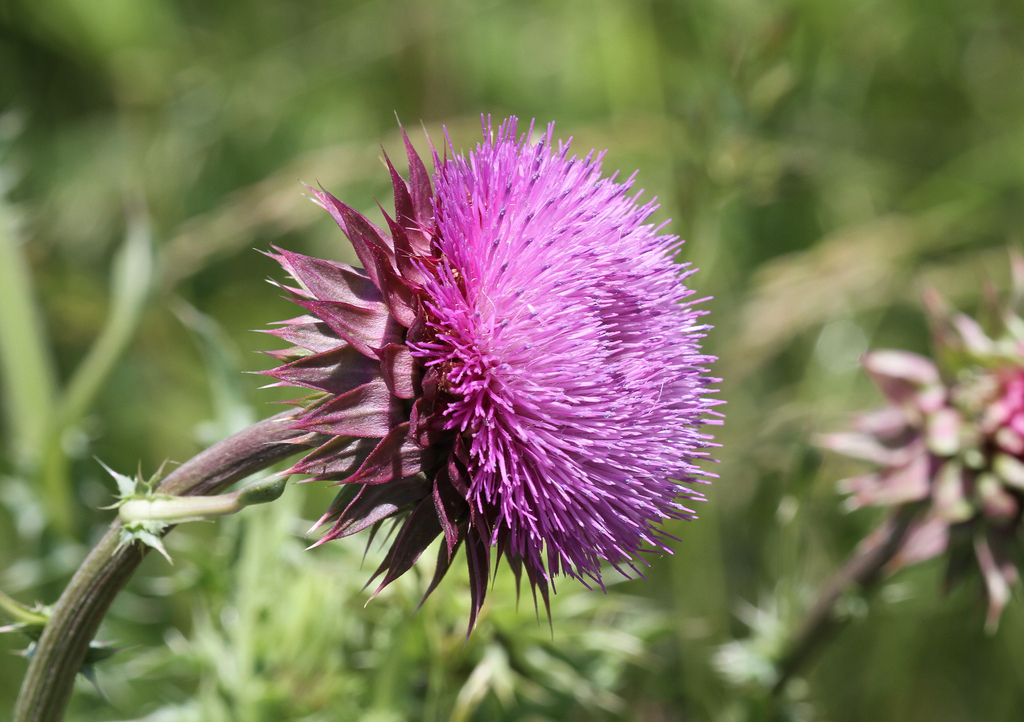 If you’re a Scot, thistle plants may be very familiar to you. After all, there’s The Order of Thistle, a high chivalric order in Scotland that’s named after this plant. Legend has it that when Vikings tried to invade a Scottish castle, one stepped on a thistle and cried out, alerting the Scots of their arrival.

Who can blame the Vikings for such a vocal reaction? Thistles are commonly associated with prickles, which appear on every part of these plants, including their leaves, flowers and stems. The prickles are an adaptation to protect themselves against herbivores, and apparently, from Viking feet.

Many groups arrange volunteer efforts to remove thistles from their national parks due to the fact that thistle can be very competitive and can drain resources, sunlight and nutrients from more desirable plants. It’s also a hassle when you’re on a mountain trail and run into thistles along the way! There are many variations on how to get rid of thistle plants, oftentimes depending on the specific thistle you’re dealing with. With that in mind, here are some suggestions to get rid of that prickly thistle.

How to Get Rid of Thistle

More mowing, fewer problems. Mowing is usually done for thistle infestations over large patches of land. This is to done to starve out the roots over the winter and to interrupt the natural process of thistle flowers from drying out to leave their seeds behind. Cutting or mowing thistle is usually done at the flowering stage and done repeatedly over a span of three to four weeks.

For the creeping thistle, cut when the thistles are four to six inches long, around early June. Cut again when you observe new shoots coming out. Remember, repeated cutting and mowing is the key to effectively get rid of those thistles.

Mowing and cutting can be used on yellow star-thistle, canada thistle, spear thistle and creeping thistle

Get to the root of it all. Many variations of the thistle depend on seeding for regeneration, making them easier to control. The trick is to dig out or spud out the roots at an early stage of the thistle growth. It can be identified by its rosette formation, when the leaves of the young thistle is spread out to form a plate-like or rose-like form. Remember, it’s always best to pull as many of the roots out as you can. Broken roots can lead to multiplying thistle growth, so be very thorough! This can be done for spear and marsh thistles.

Shady business. Some members of the thistle tribe, like the canadian thistle, rely on lots of sunlight to grow healthily. You can cover those thistles with tar paper, sheet metal or even cardboard boxes to disallow sunlight from coming in. Little to no sunlight will definitely kill those thistles after a while.

“And in the left corner…” Those thistles having too much of a good time in your lawn? Maybe it’s time to introduce some competition. Thistle seedlings are sensitive to drought require lots of sunlight and dislike competition, especially when they are quite young. Introduce grass seeds or desirable plants in your soil to ensure that many of these grasses survive over the thistles. Alfalfa has been noted to be an effective competition against canada thistle, since it comes up earlier than thistle, quickly establishes its territory and recovers from repeated mowing. You can also opt to harrow or break up the soil before seeding in your thistle competition.

Plant competition is said to be more useful with other forms of control such as mowing and the introduction of defoliating insects.

It should be noted that thistles love growing in empty areas of soil, so seeding in desirable grasses is also an effective preventive measure against thistles.

Mooooo. Do you have livestock or farm animals that like eating plants? Well, you’re just in luck, because making thistle grazing material may also help in getting rid of it. Just be sure what thistles you want to get rid of—some thistles are poisonous! Thistles like canada thistle are non-toxic and reportedly very delicious to grazing animals. Grazing can be regulated, and you can put your animals on a grazing rotation. Just be sure that the area you’re going to let your animals graze won’t take other desirable plants in the process!

Bzzzzzz. Insects can be applied as a biological control against thistles, targeting specific plants so they can grow and multiply. Using insects can be a little tricky against thistles since it will take time for them to establish themselves, and may disappear if the thistle population has been removed completely. Here are some insects that are useful in getting rid of thistles:

Burn, baby, burn. Burning thistle as a method of eradicating thistle is a very extreme measure, so it’s best that you hire a burn crew for this purpose. Also note that burning will most likely affect other plants, so proceed with caution. It’s also that recommended you employ other methods of removing thistles, such as digging or tilling to pull up the roots, after burning.

Burning may not completely kill thistles, but it can encourage other warm-season grasses into growing, which prevents thistles from re-establishing themselves.

Herbicides. There are a variety of herbicides available on the market, ranging from specific to non-specific. Some popular herbicides include glyphosate, MSMA, dicamba, MCPA, bromoxynil and 2,4,-D. Herbicide spraying is typically done when the targeted plants are young during the autumn and winter seasons, where they are most vulnerable.

If you plan on applying herbicides yourself, be sure to follow instructions carefully! You can also hire a professional crew to apply it to your lawn to ensure that it’s done properly.

Prevention. Contaminated grass seeds, mulching material and animal feed can be a source of a potential thistle infestation. When purchasing materials for your garden or farm, make sure you only shop at trusted sources and outlets.

While thistles may have been helpful against the Vikings so long ago, you have to wonder if they were ever a nuisance to the Scots themselves—thistles certainly are, most of the time. Don’t be discouraged when you see them coming back—persistence is the key. So snap on those rubber gloves and get to work!

If you enjoyed reading this article, you may also enjoy reading How To Mow the Lawn.