How to Get Rid of Vitiligo

Posted on: March 4, 2009 Posted by: Nicole Harding Comments: 2
Tags: How to Get Rid of Vitiligo 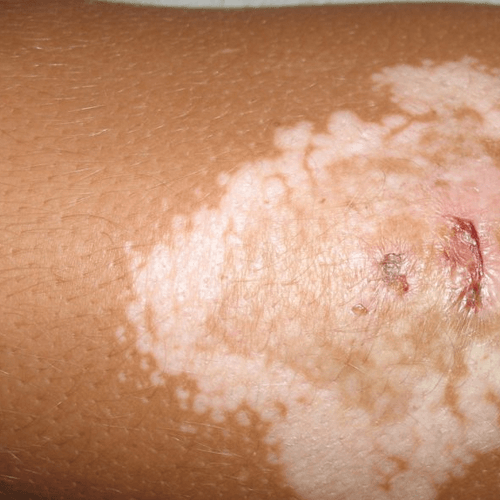 Vitiligo or leukoderma is a chronic skin disease that causes loss of pigment, resulting in irregular pale patches of skin. The precise cause of vitiligo is complex and not fully understood. There is some evidence suggesting it is caused by a combination of auto-immune, genetic, and environmental factors. The population incidence worldwide is considered to be between 1% and 2%. According to Diseases Database, vitiligo is: “A disorder consisting of areas of macular depigmentation, commonly on extensor aspects of extremities, on the face or neck and in skin folds. Age of onset is often in young adulthood and the condition tends to progress gradually with lesions enlarging and extending until a quiescent state is reached.”

The pigment that gives your skin its normal color is melanin: cells known as melanocytes make it. The cause of vitiligo is not yet fully known but many think that it is a disease in which the body makes antibodies to its own melanocytes and, in doing so, destroys them. After that, the skin cannot make melanin properly, and vitiligo is the result. In support of this idea is the way that people with vitiligo are more likely than others to have diseases—caused in much the same way—of other organs such as the thyroid. Sometimes vitiligo seems to be triggered by an episode of sunburn. It affects men and women of all races equally, but is most easy to see in people with dark skins. It is not “catching” or contagious.

About a third of people with vitiligo know of someone in their family who has it, but the exact type of inheritance has not yet been worked out. One problem here is that so many people have no idea if their relatives are hiding vitiligo under their clothing. If you have vitiligo, it does not follow that your children are sure to get it too.

These fall into two groups:

On the other hand, the most common sites for vitiligo are:

Lately, PUVA is being more and more replaced with exposure UVB Narrowband light at a wavelength of 311-313 nanometers. This treatment does not involve Psoralen, since the effect of the lamp is strong enough. The source for the UVB Narrowband UVB light can be special fluorescent lamps that treat large areas in a few minutes, or high power fiber-optic devices in a fraction of a second.

Vitiligo has many, many varied treatments that range from chemical depigmentation to phototherapy. As such, it should be the sufferer’s prerogative to learn more about the techniques outlined in this article and other methods not included in this piece. Knowledge isn’t only power, it can mean the difference between an effective and ineffective treatment. Moreover, consult your dermatologist for any potential side effects that the treatments can cause to your already sensitive skin.

Click here for more information on how to get rid of vitiligo.